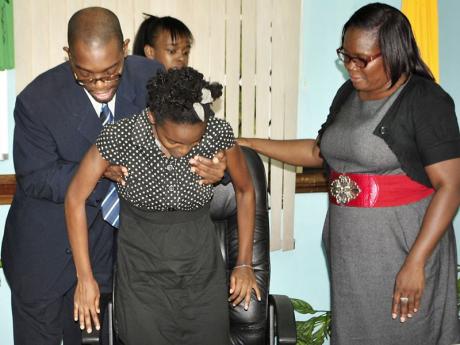 The North Jamaica Conference of Seventh-day Adventist earlier this week launched the Save-A-Youth Foundation, a non-profit venture aimed at utilising charitable funds to help youth in their social, physical, and psychological health.

The first target for the foundation is to raise $1 million to assist a 17-year-old scoliosis victim, Abigail Murray, who is a student at Northern Caribbean University (NCU).

Pastor Omar Oliphant, the youth and communications director, whose idea led to the initiative, spearheads the effort along with the Youth and Communications Departments of North Jamaica Conference.

Oliphant told Rural Xpress that the launch of the foundation came about because of a need he identified earlier this year when returning to St Ann after a visit to Trelawny with some youth from the church.

"Coming back in the car, I realised Abigail was in pain, and when I asked, she told me of her problem, which resulted from an accident she had been in," Oliphant explained. "From that day, I decided I would have to put something in place because I realised there was a critical need."

Upon his return to St Ann, Oliphant pitched the idea to his peers and received an enthusiastic response.

On Monday, approximately four months after that Trelawny trip, the Save-a-Youth Foundation was launched at the North Jamaica Conference Headquarters in Drax Hall, St Ann.

Currently, Murray is able to attend school just one day per week because of the pain she suffers.

Speaking at the launch, Newton Douglas, director, policy, planning, and evaluation at the Child Development Agency (CDA), hailed the effort by the SDA North Jamaica Conference.

Douglas said the move to help Murray was a "great one" and represent deliberate and practical steps to find and implement creative programmes to address the critical needs of our people.

Dr Joseph Smith, associate vice-president, student services at NCU, also speaking at the launch, said the university was pleased to join with North Jamaica Conference in the launch of the foundation and pledged financial support.

"She (Abigail) has been a student of Northern Caribbean University. She is indeed a bright person, very intelligent, very articulate, and, of course, very ambitious. She deserves a chance," Smith said to applause from the audience.

"We hope the contribution of Northern Caribbean University will go a far way in assisting her to access the care she needs so she can be liberated to make her contribution in service to God and to humanity."

Keith Walford, member of parliament for the St Ann South West Constituency, where Murray resides, congratulated the church for what he described as a "brilliant move".

Contributions may be made at Scotia Bank, account number 924276, St Ann's Bay.