Pete'swildone to dance away with Reggae Trophy 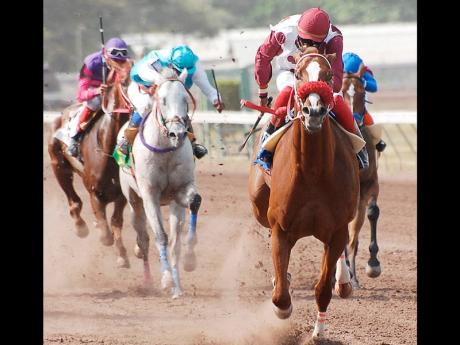 SUNLIGHT EXPRESS, with Orlando Foster aboard, gathers momentum as he approaches the finish to register a post-to-post victory by a resounding five-length margin in the 3-y-o & up claiming event over the straight course (1000 metres) at Caymanas Park on Wednesday. - Colin Hamilton/Freelance Photographer

The much-improved American colt, PETE'S-WILDONE, winner of the valuable Lotto Sprint Trophy race over 1,100 metres on May 24, should add yet another trophy to his collection at Caymanas Park today when he takes on six opponents in the Reggae Trophy grade one feature over the straight five course.

One of three starters from the stables of second-generation trainer Ian Parsard - whose father, Harry, runs the little-fancied GO GO TRAIN - PETE'SWILDONE will be having his 11th outing of the season, but the 4-y-o son of Gimmeawine has really thrived on racing and now seeks his fifth win of the current campaign.

A model of consistency, PETE'SWILDONE is coming off a third-place finish to top middle-distance horses COMMANDING CHIEF and TYPEWRITER in the June 21 Viceroy Trophy over 1800 metres but found the distance a bit out of his depth.

Prior to that, he ran on strongly to beat stable-companion POTCHEEN and DOUBLE THE HONEY in the valuable Lotto Sprint and could be deemed an unlucky loser to PERFECT NEIGHBOUR in the Chairman's Trophy over 1500 metres on May 10 when running miles wide into the straight with an apprentice rider aboard.

Although hiked in the weights with 55.5kg and again to be tested by stable-companions UPPA TUNE and POTCHEEN, not to mention the up-in-class hat-trick seeker EL PODEROSO, PETE'SWILDONE should still have the beating of this field.

Parsard has called up champion jockey Dane Nelson for the ride and with PETE'SWILDONE, having worked well, should prove too strong for the speedy lightweights UPPA TUNE and EL PODEROSO in the closing stages.

The one to beat

He beat both imported horses over the round-five course on March 1, and although the Philip Feanny-trained EL PODEROSO is a different horse now, PETE'SWILDONE remains the one to beat.

The field includes top contenders REASONABLE PRESS (Nelson up), MERU, and the useful three-year-old gelding, THE CHOSEN ONE, now thrown in for a tag after winning decisively over this trip on May 24.

It should be a good race among the three, but REASONABLE PRES, by virtue of his consistency, is given the edge.

The 6-y-o horse from the in-form stables of Ryan Darby finished a close fourth to SUNLIGHT EXPRESS over 1100 metres on a $550,000 claiming tag recently, and now dropped in class, should chalk up win number four this season.

Other firm fancies on the card are GOLD SCREW (knocking at the door) to win the opening two-year-old race, PISCEAN ROCKET to go one better in the fifth, and BLUE EYE BOY to do likewise in the seventh.