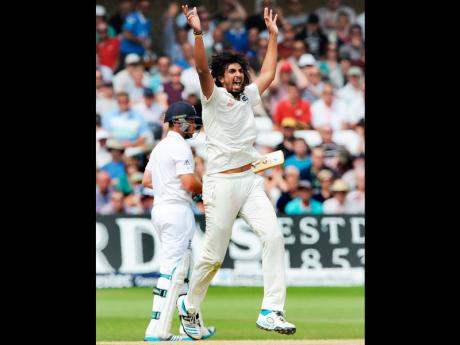 India's Ishant Sharma celebrates after capturing the wicket of England's Ian Bell for 25 during day three of the first Test between England and India at Trent Bridge. Bell was caught behind by wicketkeeper MS Dhoni. - AP

A batting collapse from 134-1 to 192-7 by England in the second session yesterday left India in control of the first Test on day three at Trent Bridge despite a 10th wicket partnership of 54 between Joe Root and James Anderson.

The hosts trail India's first-innings total of 457 by 105 runs and have Stuart Broad and Root's partnership of 78 off 85 balls to thank for avoiding the follow-on. Broad raced to 47 off only 42 balls before Bhuvneshwar Kumar trapped him lbw.

"The tea break coming when it did, it broke up the rhythm and the way they were playing," Root admitted. "It gave us a good opportunity to regroup, chat as a team, and come out and play a better style of cricket. The way Broady came out and attacked them was fantastic. He put all the pressure back on their bowlers."

Kumar was the pick of India's bowlers with figures of 4-61, but it was Ishant Sharma, who struck three times as England lost six wickets for 58 runs in the second session, who brought about England's slump.

After a wicketless opening period that saw England resume on 43-1, opener Sam Robson was unable to add to his score of 59 as he was trapped lbw in the second over after lunch by Sharma. Gary Ballance fell the same way as Robson for 71.

Ian Bell, who made six fours in his 25, was caught behind by Mahendra Singh Dhoni when he was tempted into playing at a wide delivery. He tried too late to move his bat out of the way and became Sharma's third dismissal at 172-4.

Moeen Ali took his eye off Mohammed Shami's low bouncer and was caught out by Shikhar Dhawan for 14 before Matt Prior was controversially awarded out, caught behind on five off Kumar.

The umpire believed Prior edged the ball, but replays showed it missed his bat and clipped his back leg. Consistent with India's long-standing policy on the issue, reviews were not available to the teams.

But Anderson, alongside Root, dug in and prevented India's attack from maintaining its earlier momentum. Root brought up his fifth Test 50 with a single at deep backward cover from Kumar and finished the day on 78 unbeaten, while Anderson is 23 not out.