Memories of the Great War etched in time 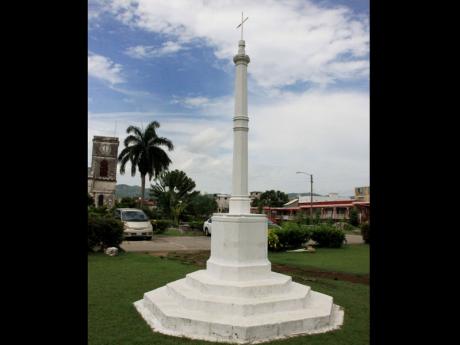 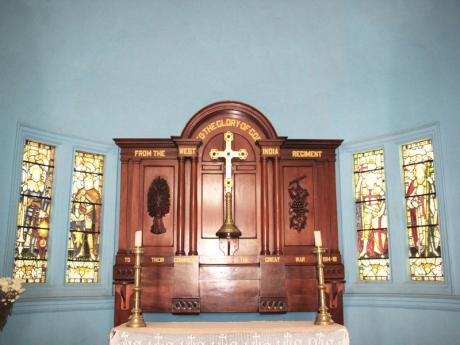 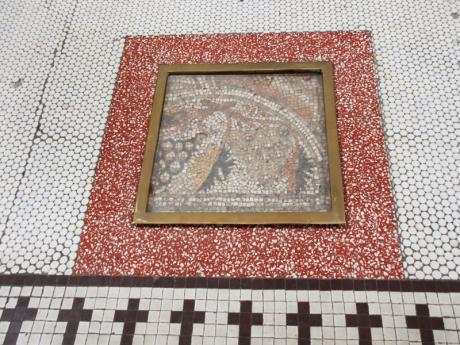 Piece of mosaic inscribed in Judeo Aramaic, from Jericho, in West Bank at Garrison Church, Up Park Camp, Kingston. 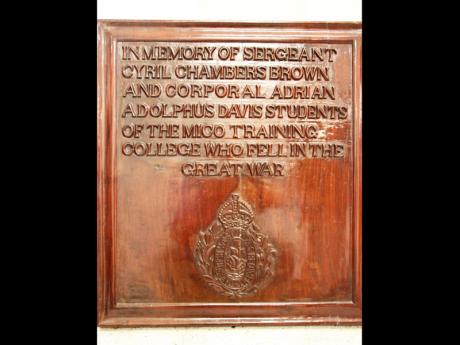 Plaque in memory of Mico students who died in WWI. 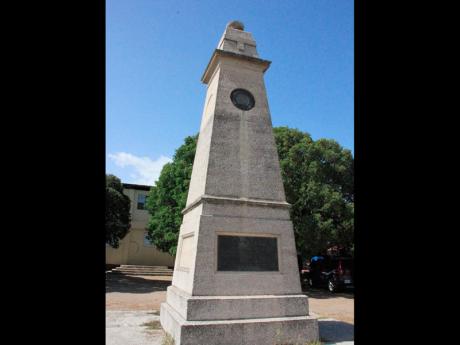 Memorial to honour students of Wolmer's Boys' School who died in the Great War, on the school campus. 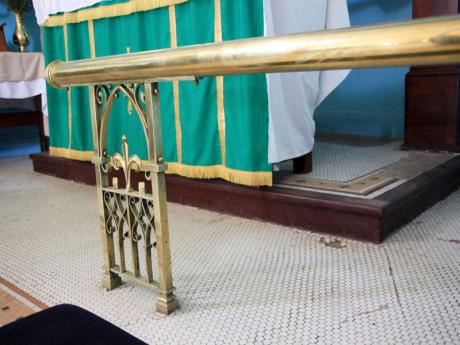 Altar railing at Garrison Church, Up Park Camp, Kingston, in memory of former churchwardens killed in France during WW1. 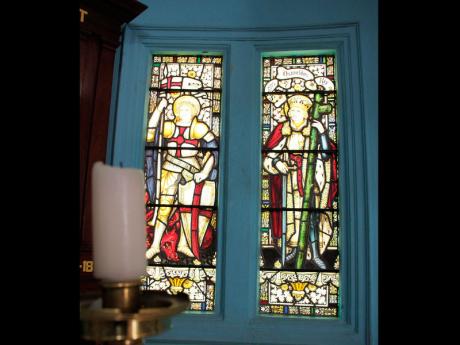 Sunlight permeates through the stained glass mosaic erected in memory of those killed in WW1 at Garrison Church, Up Park Camp, Kingston.
1
2
3
4
5
6
7

Rays from the morning sun filtered through a patch of clouds, lighting up the inscription - "Remember the love of them who came not home from the War: 1914-1918". These poignant and sombre words are inscribed at the base of a 20-foot, whitewashed column at the Montego Bay Parish Church - a silent memorial to Jamaican soldiers from St James parish who lost their lives in World War I.

Built in 1921, the Calvary, which has an octagonal base and column, in England, on the four panels at the base are inscribed the names of those who fell.

"For me, World War I is personable, in that, if we search our family histories," said Captain Stacy-Marie Dehaney, force curator, Jamaica Defence Force, cleaning off a film of lime to get a better look at the names etched on the stone, "there is a good chance that you could come across a surname like your own in your parish," she remarked.

There is nothing ostentatious about the memorial, a clean, octagonal pillar, a tribute to human endurance, spirit, resilience, and grit, but in its simplicity lie the poignant memories - 10,000 Jamaicans left the island to fight in the Great War, 1,000 lost their lives.

Ninety kilometres east of Montego Bay, a similar structure stands tall in the yard of the St Ann Parish Church, the etched names of the fallen soldiers faded, but withstanding the elements.

bound by common cause

"Many (soldiers) didn't, at that time, have any knowledge of where they were going," Dehaney said.

These men were from a wide cross section of the society, bound by a common cause. "Together, soldiers from the West Indies represented sons of gentry and sons of labourers," author Frank Cundall wrote in Jamaica in the Great War.

Jamaican soldiers were deployed
in Africa, Europe, the Mediterranean, and the Middle East. A living
testament to that campaign, a piece of ancient mosaic, is embedded in
the floor of the Garrison Church at Up Park Camp,
Kingston.

"A Turkish shell fired at a British
entrenchment in a synagogue at Ain Duk, a few miles from Jericho (in
West Bank)," informed Major Denston Smalling, chaplain of Garrison
Church.

The bombing uncovered three pieces of mosaic
inscribed in Judeo Aramaic, and one of these was brought to Jamaica by
Captain A.M. Furber of the West India Regiment.

As
years have passed, like mosaic engraved in Garrison Church, memories of
Jamaica's role in the Great War are frozen and embedded, living in the
modern world but bubble-wrapped in time.

A memorial
plaque sits in a quiet corner in the museum at The Mico University
College,

"It makes you think about choices and
adventure in a different time we can't relate to now," Dehaney
remarked.

A century ago, at the end of the war, the
memories were fresh and the sacrifices of the soldiers were engraved in
monuments erected in Morant Bay; war memorials were hung at Manning's
School, Savanna-la-Mar, Beckford and Smith School, Spanish Town, and
Mico Training College (now The Mico University College),
Kingston.

An obelisk, in reinforced concrete, stands
in the compound of Wolmer's Boys' School in memory of old students who
lost their lives in the war.

Of all the monuments, the
War Memorial at National Heroes Park in Kingston is perhaps the only
memorial which stands in its glory.

A century is a
long time in history, and memories fade, but these memorials, which have
withstood time, and as resilient as the men who they honour, stand
tall.

A verse from Abide With Me,
hymn penned by Henry Francis Lyte, captures that spirit of these men, in
foreign land - "Hold thou thy cross before my closing eyes;
Shine through the gloom, and point me to the skies; Heaven's morning
breaks, and earth's vain shadows flee; In life, in death, O Lord, abide
with me
..."