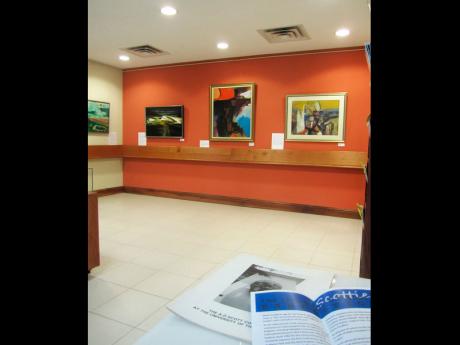 A section of the exhibit on the work of A.D. Scott mounted at the UWI Museum. - Contributed

The UWI Museum is remembering the life and work of A.D. Scott, engineer, builder, art patron and artist, through an exhibition running until July 18. The recent launch, by UWI Professor Brian Meeks, brought together a mix of individuals including, several with family or professional connections to the late, larger-than-life 'Scottie'.

Meeks, Professor of Social & Political Change and Director of SALISES (Sir Arthur Lewis Institute of Social and Economic Studies), remembered Scott's generosity in donating 25 seminal works of Jamaican and wider Caribbean artists to the university, and the process of curating that collection with the assistance of Jean Smith and David Boxer. Meeks spearheaded that process, which took place 20 years ago, in 1994. Scott died 10 years ago, in 2004.

Ainsley Henriques, chairman of the Jamaica National Heritage Trust, and Elizabeth Thomas-Hope, professor of environmental management at UWI and a cousin of Scott's, also volunteered recollections of Scott's national and family engagement.

Scott was named resident engineer at the then new University College of the West Indies in 1949, soon after his return from Canada, where he had studied civil engineering and worked for some years. He famously masterminded the move of an old rum storehouse from Gayle Valley Estate in Trelawny to Mona, where it was reconstructed as the ecumenical University Chapel. He was also involved in the engineering or construction of

several of Kingston's landmarks, including the Palisadoes Airport (now the Norman Manley International); the National Studium, built ahead of the Central American and Caribbean Games in 1963; and Jamaica's first multistorey apartment building at Manor. The construction of the Olympia International Art Centre in 1974 was his last major building project, according to his widow Jean Scott. After that, his main focus was on Jamaican art and his own painting and sculpting.

A.D. Scott was acknowledged as a major supporter of Jamaican art and artists, especially in post-Independence Jamaica. Museum Curator Dr Suzanne Francis-Brown noted that much of Scott's contribution appears to have faded from memory in a relatively short time, and that the exhibition sought to "spotlight the artistic baseline that he nurtured, but also to create a new point of memory".

The UWI Museum, located in the UWI Regional Headquarters Building and open weekdays from 10 a.m.-4 p.m., is two years old this month. Its main focus is on aspects of the UWI history and development and on the region that the university serves.