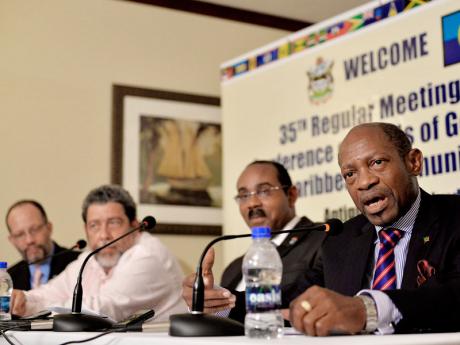 Prime Minister of St Kitts and Nevis Dr Denzil Douglas (right) responds to a question at a Caricom press conference in Antigua & Barbuda on July 4, 2014 following a meeting of regional heads of government. Looking on are (from left) Ambassador Irwin LaRoque, secretary general of Caricom; Dr Ralph Gonsalves, prime minister of St Vincent and the Grenadines and outgoing CARICOM chairman; and Gaston Browne, prime minister of Antigua & Barbuda and chairman of Caricom. - Photo by Yhomo Hutchinson

A little over a week ago, Caricom Heads of government met in Antigua. The highlight, which was widely reported in the regional media, but largely ignored by the world beyond, was that Caricom is to have a strategic five-year plan.

Speaking about this, the incoming CARICOM chair, the new prime minister of Antigua, Gaston Browne, described it as "a crucial element in the community's reform process" involving "reform of its institutions and restructuring of the secretariat".

For the plan to succeed, Secretary General Irwin Laroque said it will require a high level of cooperation and coordination between member states, the institutions of CARICOM and the secretariat.

There will need to be, he noted, a responsive governance structure, clear lines of accountability, and partnerships with all stakeholders, including the private sector, labour, civil society and youth.

It is easy to be cynical about yet another CARICOM decision suggesting a new start, but perhaps, given the amount of work that want into developing the plan, CARICOM and those attending the 35th summit should be granted the benefit of the doubt in the hope that there will be sustained commitment and implementation of what is proposed at the level of the member states.

The problem is that the absence of any detail makes it hard to be either truly supportive or critical. In this sense, Caribbean heads may be their own worst enemies. Not only has CARICOM, as far as I can tell, not published its plan, but the language used is so off-putting and low in content that it is hard to evince any great enthusiasm.

According to Prime Minister Browne, the 2014-2019 plan will seek to "reposition the Community and identify priorities and activities that would meet the challenges of the international environment".

In CARICOM's own words, the plan identifies eight integrated strategic priorities and key areas of intervention: building economic resilience; social resilience; environmental resilience; technological resilience; strengthening the CARICOM identity and spirit of community; strengthening community governance, along with coordinated foreign policy, research and development and innovation. In other words, all you might expect of any modern state.

But what has not been said is exactly what this means in practical terms, who will deliver it, how and when.

Worryingly, too, the statement issued by the CARICOM Secretariat at the conclusion of the meeting contained an important caveat. It made clear that the priorities and arrangements to be put in place across the region will have to take into account the resource limitations, both human and financial, across the implementing agents.

In the real world, in business, in better managed academic and NGO circles, there would be, in any strategic statement of this kind, some indication as to how the executive authority involved - in this case a multitude of sovereign governments facing in different directions - intend delivering what has

been agreed; a clear and publicly available timeline; details of the deliverables to measure performance against; and the clear allocation of responsibilities.

While it is quite possible that the plan does all of this and that a public document will emerge that will enable the Caribbean people and the wider world to measure the language agreed against the probability of delivery and performance, past experience, while being no guide to the future, suggests this far from certain.

Most Caribbean governments are struggling to keep their economies afloat and few have time to focus on desirable but largely optional extras.

Countries in the region are at differing
stages of economic development; most of the region does not have
contiguous borders, and so cannot benefit from economies of scale; the
transport links that exist are poor and expensive; most politicians look
inwards and are focused on domestic survival strategies; and almost
every nation has different foreign policy objectives, and in reality, is
going it alone.

There are also other issues of
importance.

The Caribbean is now engaging seriously
with the rest of the hemisphere in which it sits, and irrespective of
externally led interest from the wider world, new partners in Central
America and South America may offer new and better integration
opportunities.

There needs to be a new leadership that
is able to encourage delivery through passion, inspiration and
concentration on results rather than through
rhetoric.

The media need to be less parochial, ask
serious questions and find new ways to see the
region.

Far more importantly perhaps, the idea of a
plan has emerged as global centres are changing and an educated younger
generation no longer thinks in the same way about the region, its
institutions, geographical boundaries, sovereignty or
planning.

This is not to say that the Caribbean and
CARICOM have ceased to be relevant, but that the internal, external and
generational dynamics have changed so dramatically since the body's
inception that trying to embrace a plan may be surrounded by too many
uncertainties to assure success.

I would like to be
wrong and wake up on or around January 1, 2020, and see a
well-integrated, stable and secure group of Caribbean nations
experiencing growth, with high levels of employment, an education system
relevant to the future, a dynamic private sector, and a new type of
leadership better equipped to deal with a multifaceted and now
constantly changing global environment.

While it is
good that the region is attempting to develop a narrative about its
future, so far it is not clear what this is, whether the plan amounts to
a convincing vision or if this can be expressed in language that
individuals can easily relate to, or more importantly judge where they
would wish to see themselves 20 years from now.

As
Cuba has found, planning has many shortcomings. Following its recent
comprehensive national consultation, subsequent agreement, the
publication of national guidelines, and careful implementation, its
government is finding delivering a social and economic plan complex and
difficult, despite the centralised nature of the Cuban
system.

While there may be a case in some nations for
top-down government approaches, what CARICOM seemingly envisages is
likely to be much harder to deliver in open economies where to a
significant extent change is driven by the market and many hard to
forecast global factors .

No doubt CARICOM will be
saying more about how it intends to proceed, but what would be tragic if
in developing a plan Caribbean heads of government fail, and come to be
seen to have inhabited a parallel world to those who have to live in
it.

David Jessop is director of the Caribbean Council.
david.jessop@caribbean-council.org