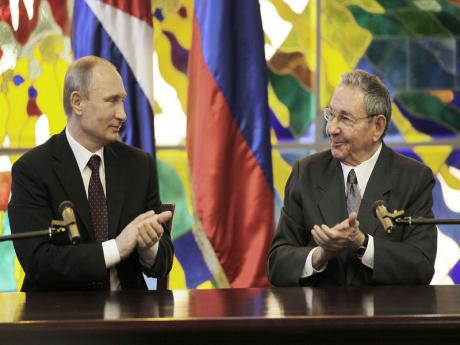 Russia's President Vladimir Putin (left) and Cuba's President Raul Castro applaud at Revolution Palace in Havana, Cuba, Friday, July 11. Putin began a Latin American tour aimed at boosting trade and ties in the region with a stop Friday in Cuba, a key Soviet ally during the Cold War that has backed Moscow in its dispute with the West over Ukraine. - AP

Russian President Vladimir Putin began a six-day Latin American tour aimed at boosting trade and ties in the region with a stop last Friday in Cuba, a key Soviet ally during the Cold War that has backed Moscow in its dispute with the West over Ukraine.

The two countries signed about a dozen accords in areas such as energy, industry, health and disaster prevention. Russian companies will participate in petroleum projects around Boca de Jaruco on the island's north coast, and that cooperation will extend to offshore oil deposits, Cuban government website Cubadebate said.

Moscow is also forgiving 90 per cent of Cuba's Soviet-era debt, which totals more than $35 billion. The remainder will be invested in education on the island, Putin added.The debt agreement is "another great, tangible generosity of the Russian people toward Cuba," President Raul Castro said.

Russian news agency ITAR-TASS said Putin met with retired leader Fidel Castro for an hour and discussed topics ranging from international affairs and the world economy to Russian-Cuban relations. He and Raul Castro also participated in a ceremony at Havana's Memorial to the Soviet Internationalist Soldier.

Amid the crisis in Ukraine, the countries on Putin's itinerary have shown themselves to be sympathetic to Russia's position on the conflict, or at least not overtly critical.

"In the international arena, we agree with the current policy of strength and political intelligence that the Soviet Union — I mean Russia — is carrying out," Castro said.

Putin travels next to Argentina, whose president, Cristina Fernandez, accused the United States and Britain in March of having a double standard for criticising a pro-Russian secession vote held in Crimea while backing a status referendum in the disputed Falkland Islands.

After that, he goes to Brazil, which was among several nations opposing Russia's possible exclusion from an upcoming G20 summit in Australia due to the crisis.

"We are grateful to South Americans for the support of our international initiatives, including outer space demilitarisation, strengthening international information security and combating the glorification of Nazism," Putin said in an interview with Prensa Latina before the trip.

On Friday he reiterated Russia's opposition to the 52-year-old US embargo against Cuba, which aims to isolate the communist-run nation economically and financially.

Havana and Moscow have a shared history dating to the Cold War, when they were united by ideology and opposition to US influence. They drifted apart in the 1990s, however, as the collapse of the Soviet Union ended billions of dollars in trade and subsidies for Cuba.

In December 2000, shortly after his first election, Putin visited the island and pledged to reinvigorate relations.

Russia said in February that it was looking to expand its worldwide military presence, including asking permission for its navy ships to use ports in Cuba and elsewhere in Latin America. A Russian intelligence-gathering vessel has docked in Havana on multiple occasions in recent months.

Putin plans to attend a presidential summit of the BRICS group of nations in Fortaleza, Brazil, in the coming days. He is to be in Rio de Janeiro today for the World Cup final and ceremonial handover of host duties for soccer's marquee tournament, which next takes place in Russia in 2018.