Cigarettes butt out of events 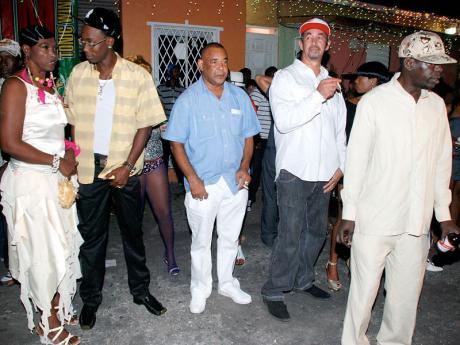 There was resistance in the beginning, but the Ministry of Health can take a pat on the back as its anti-smoking law has been bearing fruit with a reduction in smoking at entertainment events.

In the past, it was customary to see numerous persons openly blowing smoke from their cigarettes into the air, whether at indoor or outdoor venues. Many persons even thought it was impossible to enforce the Public Health (Tobacco Control) Regulations 2013, which prohibits smoking in public spaces. A year later, promoters are reporting a decline in smoking among party patrons.

Promoter Desmond 'Hard Earz' Steele believes
that while some persons still light up their cigarettes and cigars at
events, there has definitely been a decline.

"It
actually works, and there are people who abide by it. People are still
smoking, but you can see a decline. It is something that we should take
seriously and something that the Government should talk to us about so
we can educate the patrons," he said.

He explained
that persons go to parties to drink, smoke and relax, so it will be
difficult to get them to stop
completely.

Interestingly, he said persons who
continue to smoke at events try to respect the space of
others.

"What I have seen is people walk to the back
of the party and away from the crowd to smoke. So there has definitely
been a decline since the ban. And I don't think the penalty should be as
harsh especially with the legislation on marijuana coming on board," he
said.

Policing
the matter is also an issue, as Steele says it is near impossible for
six or seven policemen to keep watch on 3,000
patrons.

"We have taken an approach of warning people
rather than arrest. Arrest is a last resort. In most instances, people
have complied," he told The Sunday
Gleaner.

"The biggest challenge we have is
at football matches and entertainment events," he
added.

One of the last reported arrests for smoking in
public came last year during the staging of Reggae Sumfest, merely
weeks after the Tobacco Control Regulation came into effect. It was
reported that three smokers were among 30 persons arrested at the event
last year; however, they were only arrested after ignoring previous
warnings from the police.

Daniel Brown, substance
abuse officer at the National Council on Drug Abuse, admitted that
people are still "smoking at shops, bars and parties". However, "the
overall sales from Carreras has gone down. Based on the ban, there has
been a decrease in cigarette use," he said.

In June,
Carreras Limited reported that sales went down by almost $2 billion. The
company had sales of $10.3 billion at March 2014 year end, compared to
$12.2 billion the previous year. The ban on smoking was said to have a
major impact on their sales.

Generally, Brown says,
"There has been improvement. Most places that you go now, it has cut
down."

He also added that further decrease is possible
with higher taxes on tobacco products and more education on the dangers
of smoking.

While Brown believes higher taxes and
more education would reduce the number of persons who smoke, 26-year-old
Michael Smithsays he doubts this will happen.

"Not
more education. I already know what it does. Higher taxes would affect
people that are not working. For me, I would still find the money," he
said, noting that he has been smoking for about 12
years.

Smith also admitted that he attends at least
two events weekly, but believes the decline in smoking at events only
came in the initial stages of the ban.

"Yes, there was
a decline for a while when the ban came in, but after a while, it kinda
free up.You even have parties where they still give out cigarettes," he
told The Sunday Gleaner.

And at
clubs, he says smokers tend to congregate on the rooftop for smoking
purposes.

"They have areas like on the roof, but most
times, nobody says anything to you, not even the police," Smith
said.

Meanwhile, Health Minister Dr Fenton Ferguson
recently announced that the deadline for businesses to become fully
compliant with the tobacco regulations has been moved to August 16
because of additional changes to the regulations. Thereafter, the health
minister warned that the regulations will be strongly
enforced.