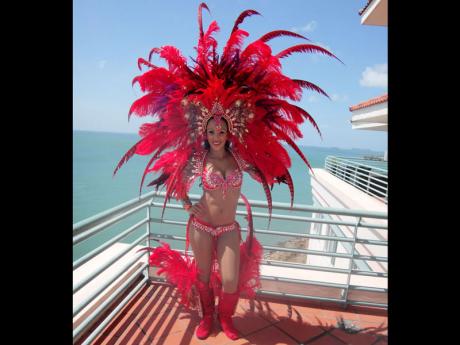 Designing might not be her forte, but Jodi 'Jinx' Henriques is confident that persons will like the costume she designed for Trinidad Carnival 2015.

Henriques says she has been a regular at Trinidad Carnival since 2006 when she was invited to play mas by one of her Trinidadian friends. Three years ago, she took on the task of helping carnival-goers from Jamaica with tickets and costumes during the season.

For the 2015 carnival season, Henriques has gone a step further to design costumes for the band, Bliss, which is a sister band to the much bigger Tribe.

Being the costume designer newbie that she is, Henriques said the process was overwhelming at first, but experienced designer Monique Nobrega gave her some much-needed help.

"She showed me how to design a costume. It was harder than I thought. Having to do it all by myself from scratch was really difficult. It really did get a bit overwhelming, but Monique was there to show me the tricks of the trade," she told The Sunday Gleaner, adding that she has always jazzed up previous costumes.

With the costume now complete and ready for the big revel on July 19 at the Queens Park Savannah, the home of Carnival in Trinidad and Tobago, Henriques is confident that it will be liked and will reflect Bliss' theme, Blue.

"I looked at it as if I was in a helicopter looking down. I wanted it to be a section that pops. I think it is a colour that will look great on all skin tones," she said.

"I have nailed it. I know that it will be sold out. I would like for my friends to like it and that it would be their costume of choice."

The costume will be part of a private section that will be managed by Henriques, and she says the costumes will be offered to Jamaicans first.

"The foreigners spend a lot of money so you have to treat them right. I want to cater to Jamaicans first then the Trinis. I welcome them with open arms as they have done for me over the years," she told The Sunday Gleaner.

Already, a female bodybuilder has asked Henriques to design a costume for her to wear at an international bodybuilding competition. And where Bacchanal Jamaica is concerned, she is definitely open to designing for a band locally.

"I hope they will open that door for me," she said.

Henriques says she is quite comfortable designing costumes, so runway fashion is not in her immediate future.

"I would like to stick to what I know, and for now it's carnival. But if the opportunity arises, I will not turn anything down," she said.