Out of commission but 'Owen' us an explanation 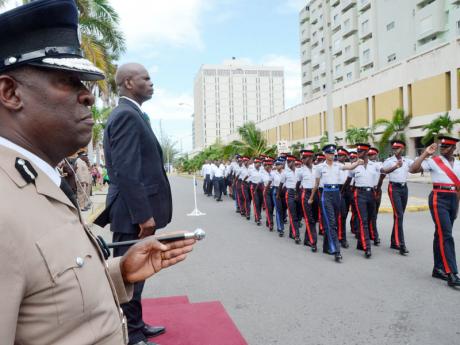 Owen Ellington (left), commissioner of police, and Steadman Fuller, custos of Kingston, at a parade of the Jamaica Constabulary Force Jamaica 50 salute and march past at the Kingston waterfront on August 5, 2012. - Rudolph Brown/Photographer

Heart attacks and earthquakes come with more warnings, but the departure of Police Commissioner Owen Ellington occurred so fast that the entire country was left flatfooted like Tsetsi Davis after being pummelled by Sakima Mullings in the Contender boxing finale.

With great assurances that he was not pushed and that he made the decision to make way for uninterrupted investigations, he jumped on his horse and rode off into the sunrise. After 34 years of service, it was quits. Now the commission of enquiry into the Tivoli incursion and 70-plus confirmed fatalities, and the trials of the alleged 'death squad' Clarendon cops, can proceed.

However, this explanation has satisfied our appetites like hors d'oeuvres and finger food at a fat man convention, and we are left wanting. Milking the politics, Opposition Spokesman Derrick Smith grasped the opportunity from the dissatisfied curiosity that Ellington's departure has triggered. Smith, a man with the most theoretical experience as security minister in Jamaica's history, posed several questions to current Security Minister Peter Bunting.

He queried if allegations of human-rights breaches from the above-mentioned cases proffered by the commissioner, as well as other allegations of police killings and brutality, led to the demand for his removal. More specifically, Bunting was asked if the American legislation, known as the Leahy Amendment, was invoked to prevent the Jamaican armed forces from getting necessary technical and operational equipment. This statute essentially blocks the US Department of State and Department of Defence from providing military assistance to "foreign military units that violate human rights with impunity". The question, nonetheless, is reasonable, because there have been myriad reports of extrajudicial killings by the police over the years. The Clarendon death squad allegations are serious, if true.

Assuming the answer for himself, Smith also asked what "... steps are being taken by the Ministry of National Security and the Government to restore Jamaica's good standing under the terms of the Leahy Act of the United States of America". Of course, this presumes that we have been found wanting.

For his part, Bunting has stated in unambiguous terms that he had no major issues with Ellington and that they enjoyed a good professional relationship. Indeed, just about everyone in civil and civic society - hmmm, maybe except, the embattled former leadership of Jamaicans for Justice - was comfortable with him.

On Monday, The Gleaner carried a story in which a former cop, 'squaddie' and 'paarie' was arrested on major drug trafficking charges. While it is true that in 1996, the two, along with the former cop's girlfriend, were charged, nothing connected him with the crime for which the other two were convicted. The courts found that then Superintendent of Police Ellington did not even have a case to answer.

It is an important point to be made and lesson to be learned here. However inconvenient, disappointing or unpopular the decision of a court is, under the Jamaican and American judicial systems - and they are very closely aligned - there is the presumption of innocence until one is found guilty by a court. Furthermore, once the jury has spoken or the judge ruled, the judgment is final and binding on all, both nationally and internationally. This is the only means by which citizens whose human rights must be always protected can be found guilty and punished in democracies such as Jamaica and the USA. Thus, any police killing or other sorts of punishment without a trial breaches human rights.

Human-rights violations by the security forces are not unknown in the Americas. The Los Angeles Police Department has had its fair share. In 2001, some 75 officers were investigated or charged and more than 100 criminal convictions they procured were overturned. In 2012, during the Occupy protests, a consortium of legal experts observed "a pattern of abusive and unaccountable protest policing". Moreover, they allege that New York Police Department (NYPD) officers had hundreds of human-rights violations, yet "there has been near-complete impunity for alleged abuses". Between July 1, 2010, and June 30, 2011, some 2,241 reports of civil-rights violation against the NYPD were made, and more than US$22 million was paid out in settlement of some of them. Indeed, between 2011 and 2012, more than 35 cases had settlements of more than US$100,000.

Jamaica, doubtless, has its fair share of problems with killings by police. However, the term 'extrajudicial' is just as statistically inaccurate as the stereotypical stigmatised ghetto youth, or 'wutliss' puppa'. Jamaica's constabulary and military have internal mechanisms for the investigation of criminal, unprofessional and corrupt behaviour. Externally, the Independent Commission of Investigations (INDECOM) was established a few years ago, and it has both investigative and prosecutorial powers. Interestingly, INDECOM Commissioner Terrence Williams, a seasoned lawyer, noted last year that only around 20 per cent of all police killings were under questionable circumstances. We also have an independent public defender, and both parties have empanelled Tivoli commissions of enquiry. Notably, the Tivoli matter was under military leadership, not police.

Furthermore, a commonly overlooked fact is that, despite the decline in the killing of current and former police by criminals, the assault on the constabulary is one of the highest in the 'free world', in countries not at war. One will recall that, in one recent year, there were around 20 police murdered. While it is true that there are killer criminal cops, the data do not support their being the majority. As for the Clarendon policemen, yet unconvicted, it was Ellington himself who turned over his own investigations voluntarily to INDECOM.

All I am saying from the above is that, given the processes, systems and personnel, it would be unfair and almost extrajudicial itself to Ellington. So guess what? I await better answers for his sudden retirement.