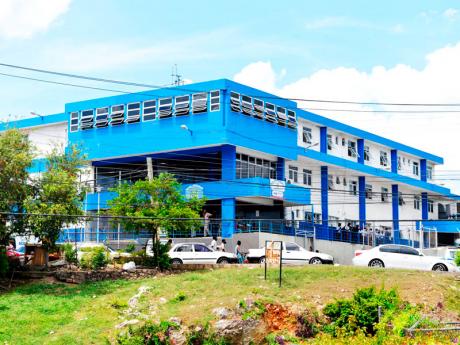 This April 17 photo shows the main police station in the central Jamaican town of May Pen. The Clarendon Police Division has been cast in turmoil amid allegations of a constabulary death squad. - AP

So, Owen Ellington has cut and run. How else can we explain his sudden 'retirement' announced after he'd just completed a routine Monday morning meeting with senior officers without a hint of retirement being communicated? Obviously, his situation deteriorated rapidly thereafter. Something was brought to his attention that destroyed the substratum of his tenure.

According to RJR News:  "Commissioner Ellington has reportedly indicated his decision to retire based on the need to separate himself from the management of the force prior to the commencement of the West Kingston commission of enquiry.

In addition, he believes it will allow the Independent Commission of Investigations (INDECOM) to conduct its probe into allegations of police-involved killings in the Clarendon Division, some of which occurred during his tenure without any perception of influence or interference on his part."

What absolute rubbish! The Tivoli enquiry was first heralded over a year ago. At that time, the Police High Command said: "The decision of the Government ... to set up such a commission of enquiry ... is welcomed by the Police High Command and, as such, the Jamaica Constabulary Force (JCF) will participate when required and also offers its full support to the enquiry." ('We're all on board', Gleaner, May 7, 2013).

Police commissioners don't resign before enquiries into police action are held. They participate (if required) and, if necessary, use the enquiry's findings to implement alterations to police operations or policy. Depending on the findings, a rare resignation AFTER the enquiry may be appropriate.

Nothing to do with Tivoli

No allegation was made against Ellington with regard to the Tivoli incursion. The overwhelming weight of citizens' angst was against the military. No Jamaica Defence Force commander has resigned. This is nothing more than an outright insult to Jamaicans' intelligence.

When the issue of INDEBRAIN's 'investigation' into 'death squads' first surfaced in January 2014, Owen Ellington said, "They have the full backing of the JCF because this matter needs to be probed and the truth unearthed and made public. It's in the interest of the police force; ... of the country and our international reputation." ('Commish supports probe into alleged death squads', Gleaner, January 22, 2014).

INDEBRAIN itself has been desperately back-pedalling on this 'investigation' as if it didn't exist. In a reply to one of my columns ('Not so premature at all, Mr Robinson', Gleaner, April 23 2014), INDEBRAIN wrote:

"Mr Robinson commented that the INDECOM commissioner called a press conference to announce the probing of the possible involvement of senior policemen in several questionable civilian shootings. This could not be further from the facts."

"The purpose of the press conference was to update the public on our investigations - as INDECOM has always done ... . Further, the commission did not announce the possible involvement of senior policemen."

Finally, which INDEBRAIN investigation could frighten anyone? That grand organisation is yet to obtain a single conviction and, with specific regard to the 'death squads' issue, the Director of Public Prosecutions (DPP) has been reported by The Gleaner ('Death squad holes: DPP to reassess Clarendon police murder cases', July 2, 2014) as effectively pouring cold water on INDEBRAIN's work:

"The country's top prosecutor has raised questions about the strength of all but two of the 11 alleged police 'death squad' cases ...."

How on God's green earth could this alleged 'investigation' result in the fall of a police commissioner? Yet the United States has helped create this smokescreen and even thickened it by adding the extraordinary revelation (not normally made public) of action threatened or taken under The Leahy Act to withhold arms sales to Jamaica. Ellington's lawyer leapt at the opportunity to imply there's a connection between US Leahy Act sanctions and Ellington's hasty exit.

In the midst of all this obfuscation, there've been calls for a foreign commissioner. This can only be a stopgap measure. Independent countries must run their own affairs. But if we don't address the real problem, we'll be forever looking for foreign commissioners. Ellington isn't the first commissioner to suddenly bolt. The problem isn't personal. It's systemic.

It's related to the admirable but impractical strategy that creates a path from rank and file to commissioner. Many factors, including the 'squaddie' mentality, militate against this as reality. Until we have an officer training school from which graduates enter the force above the rank of sergeant, it'll be a recurring problem.

So, now that both given reasons for Ellington's 'retirement' have been thoroughly discredited, we must use our analytical skills to discover the real reason for his sudden departure since, seemingly, neither he nor our Government has any intention of letting us in on the secret.

What seems clear is that, similar to Dudus' crash and burn, the US-UK axis is the driving force behind Ellington's unceremonious exit. Two years ago, Jamaica's security minister gave Ellington an unconditional, public vote of confidence which hasn't been withdrawn. Ellington's lawyer referred to pressure from "international partners" that caused Ellington to jump. One radio station reported Ellington's visa had been revoked. Peter Bunting refused to confirm or deny.

Sounding like his prime minister, he suggested that media ask Ellington. Ellington's lawyer was quoted by RJR as saying, "At this time, Mr Ellington isn't at liberty to speak to any of these issues ... ."

Why? Either his visa was revoked or not. Why not simply respond, "Nonsense"? Whatever his motive for refusing to report to taxpayers who fund his salary, Ellington, by his mysterious silence, invites speculation.

What's the foreign axis up to? In 2012, US used its regular narcotics report to praise Ellington's work. By 2014, something changed. On July 6, Gleaner senior writer Gary Spaulding quoted US Embassy sources as follows:

"... The US ... government 'places great importance on its relationship with the Jamaican Government and civil society. We enjoy close bilateral cooperation on a broad range of social, economic, and security issues.'

"The embassy added that it 'remains concerned about allegations of extrajudicial killings by elements of the JCF. While investigations into these allegations continue, the US is managing assistance in accordance with our laws and policies governing US foreign assistance.'"

Really? Seriously? Come on, Gary, didn't you read your own report which earlier included "We refer you to the Government of Jamaica for questions about Commissioner Ellington's departure,' said the US Embassy ..."?

One thing I guarantee you: Anything specific said after that is NOT the reason for Ellington's departure. It's an attempt to confuse and obfuscate. Between 1991 and 2001, 1,400 Jamaicans were killed by the police. Recently, police killings have been on the decline. THIS is the big issue America has with Ellington? C'mon, man!

A far more valuable hint was hidden away in an RJR news item (July 3, 2014) when the illusion of police killings was once again waved at us like a matador's cape as being connected to Ellington's scamper. The news item ended: "Well-placed sources say British authorities have temporarily restricted Jamaica from surveillance sharing."

AT LAST: Grist for Arsenio Hall's "things that make you go, hmmmmm" category. Surveillance is what did for Dudus. It has nothing to do with police shootings of poor black people about whom the axis couldn't care less. Who're the Brits observing? Why Britain? What/where's British national interest in the Caribbean? Who in JCF don't the Brits trust with their surveillance tapes? Why? What's standing in the way of a "surveillance-sharing" resumption?

What sensitive recent intelligence has the US-UK axis received that can't be shared? Who's the subject of the intelligence? Or, are there multiple, connected 'persons of interest' whose observation tapes the axis dare not share with Jamaican police? Why? How would sharing with Jamaican police hinder ongoing investigations? What'll permit "surveillance sharing" to be resumed AT LAST? Under our laws, surveillance requires a court order based on intelligence usually from former co-conspirators whose motives could include self-preservation or revenge.

I've given you all the tools you need to think your own way to the mystery's solution. Think laterally (outside the box). Don't ask Doctor Who. Channel Laurens Bancroft.