Connect the dots: Same-sex marriage and decriminalisation of buggery 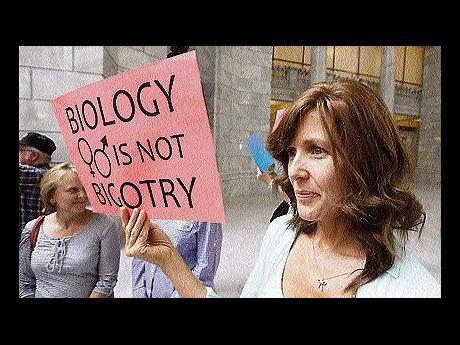 In this April 11 photo, Ali Bell and other supporters of Utah's same-sex marriage ban stand up for traditional marriage in Salt Lake City. Pro- and anti-gay lobbyists in America continue to jostle over the divisive issue of gay marriage. - AP

It is a credit to Caribbean democracy that CARICOM has responded to concerns raised by a group of 140 organisations across 12 regional territories and communicated through the Jamaica Coalition for a Healthy Society (JCHS). These concerns related to PANCAP recommendations aimed at reducing HIV-related stigma and discrimination as outlined in a CARICOM press release dated April 11, 2014.

Chair of CARICOM with responsibility for health matters, Dr Denzil Douglas, prime minister of St Kitts & Nevis, was of the opinion that the recommendations may have been taken out of context. Although the statement by the 140 organisations did not mention it, he pointed out that there has been no talk of same-sex marriage. This writer's impression is that he forgot, significantly, to add the word 'yet'. The decriminalisation of buggery is a necessary condition for the legalisation of same-sex marriage. With all due respect, it is alarming that Dr Douglas, speaking on behalf of CARICOM, does not seem to recognise this.

Because of its heavy dependence on foreign aid, the Caribbean is vulnerable to the dictates of the moneylenders, whose stance on sexual rights is clear. Only last month, United States Vice-President Joe Biden declared that sexual rights "trump national cultures and social traditions". Notably, VP Biden, arguably the second in command of the most powerful nation on earth, warned that "there is a price to pay for inhumanity" (supposedly, it can be construed that 'inhumanity' is anything that does not embrace gay rights).

There is no need to bury our heads in the sand. Let us not think for a moment that the same purse-dangling international agencies and regional gay lobbyists that are pressuring the Caribbean to decriminalise buggery will not also, in due time, call for the legalisation of same-sex marriage. After all, there must be 'justice for all'!

The call for the decriminalisation of buggery does not exist in a vacuum. It is but Step 1 in a downward spiral characterised by a series of decriminalisation, enactment and amendment of laws relating to sexual behaviour. Attention is here drawn to the fact that in Barbados, the UNICEF Champion of Child Rights, Faith Marshall-Harris, has raised the issue of amending laws to allow minors to access sexual-health services without the consent of parents. What is such a move saying to us, as a people, in this region? In St Lucia, the Family Planning Association has suggested that minors be allowed to access the morning-after pill without parental consent and without prescription - all in the name of addressing the HIV pandemic.

But if our sole purpose is to lower the incidence of HIV/AIDS, why then are we pursuing initiatives that will only fuel the epidemic? PANCAP has noted the need for evidence-based social policies yet insists on ignoring all evidence that exposes the health risks of buggery. It also ignores the link between intergenerational poverty and early initiation of sexual activity among girls.

We recognise the need to vaccinate our young girls against HPV, but we are blind to the fact that we ourselves are creating an environment that supports early sex. Logic suggests that our efforts should at least include a very strong, behaviour-change communication strategy aimed at promoting delayed onset of sexual activity among children and teenagers. This is not the case.

The call for the decriminalisation of buggery exploits social concern about the HIV pandemic and bundles together legitimate issues such as women's empowerment, child rights, disability and even bullying to promote the normalisation of homosexuality and the oversexualisation of children under the guise of 'justice for all'.

This strategy is a deliberate, well-thought-out, progressive brainwashing that uses clever language to beguile, intimidate and indoctrinate. Such words, phrases and concepts include 'justice', 'discrimination', 'love', 'tolerance', 'inclusiveness', 'human rights' - wholesome terms that have all been invested with a gay-centric definition.

Make no mistake: The language of sexual rights is both intense and volatile. It ignites strong responses, passions and objections such that any moral stance regarding homosexuality is deemed to be judgemental and homophobic; its users risk being accused of hate crimes; anyone who is not pro-gay is a hater, and all haters are subject to paying "the price of inhumanity".

That explains the hefty fines imposed on bakers, florists, photographers and marriage officers who have refused to participate in gay weddings in the United States, Canada and Europe. It also explains the 30-day imprisonment of the Rev Ake Green in Sweden for preaching a sermon on homosexuality and why some of Uganda's HIV programmes have begun to lose funding.

Without any sound logic, sexual rights have been declared to be human rights, and are increasingly being likened to women's rights and black civil rights. Talk about playing on one's emotions! However, the spurious lawsuits and the violations of fundamental human rights - e.g., freedom of expression, freedom of conscience, and freedom of religion - that have accompanied the implementation of 'sexual rights' in those countries where there is 'justice for all' are a clear indication that something is definitely wrong with the notion of sexual rights. We in the Caribbean have the benefit of both hindsight and foresight. If we are blind, it's because we do not want to see.

As Caribbean persons, we are quite capable of thinking critically about the long-term implications of all the law tampering that we are currently contemplating. Before we jump on the bandwagon, let's think long and hard. We - particularly those entrusted with the task of leading the Caribbean in the response to HIV/AIDS - need to rigorously examine the emotive words, concepts and phrases that undergird the new sexual-rights philosophy.

Discretion is not discrimination. Conscientious objection is not intolerance, nor is it a hate crime. Speaking truth is not homophobia. Developments in the Caribbean point to the need for open, honest dialogue regarding the region's stance towards the notion of sexual rights. This dialogue must take place among our own people, and persons of all persuasions must be allowed to express their views fearlessly in the interest of the common good and independent of carrot and stick politics.

If at the end of our discussions, we decide to embrace the concept of 'sexual rights', stamped with our own conditions, interpretations and expressions upon it, let us do so, but with our eyes wide open. Let us not be fooled, baited or coerced into committing what could very well be social suicide.

Dr Veronica C. Evelyn is a sociologist. Email feedback to columns@gleanerjm.com and proteqt@gmail.com.