More volunteers heading to the battleground 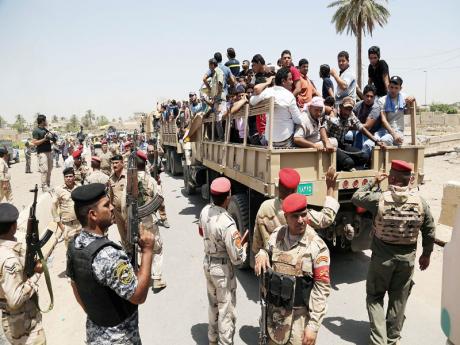 Iraqi volunteers board military trucks to join the army in response to the call from the country's top Shiite cleric to join the fight against Sunni militants. - File

Iraq is airlifting some 4,000 volunteers to an embattled city west of Baghdad to help bolster government forces locked in a running battle with Sunni militants there, authorities said yesterday.

Around 2,500 of the volunteers arrived in Ramadi, located 115 kilometres (70 miles) west of the capital, last Friday and were to be joined by the remaining 1,500 yesterday.

The vast majority of volunteers are Shiites who have answered a call from the country's top Shiite cleric, Ayatollah Ali al-Sistani, to defend Iraq from the militants who have overrun much of the country's north and west over the past month.

The Sunni militant blitz is led by the Islamic State extremist group, which has unilaterally declared the establishment of an Islamic state ruled by Shariah law in the territory it controls straddling the Iraq-Syria border.

The government's reliance on Shiite militias — who have deployed in sizable numbers to several cities across the country — to help counter the threat from Sunni militants has ramped up sectarian tensions, and helped fuel fears that Iraq could return to the wholesale sectarian bloodletting that engulfed the country in 2006 and 2007.

There are already worrying signs of such violence.

Human Rights Watch said last Friday that Iraqi security forces and government-affiliated militias appear to have killed at least 255 prisoners in six cities and villages since June 9. It said five of the mass killings took place when security forces were fleeing as militants advanced, and that the vast number of prisoners killed were Sunni.

There is also evidence the militants have carried out mass killings. The Islamic State group posted graphic photos online last month showing the militants killing dozens of police and soldiers. The Iraqi military confirmed the photographs and said around 170 soldiers were killed.