Jamaica has lost a devoted son! 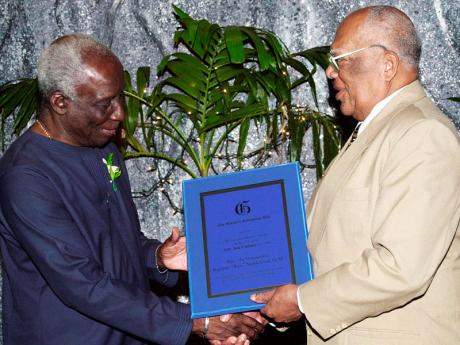 The late Professor Rex Nettleford (left), The Gleaner's 2001 Man of the Year and Honour Award recipient for Arts and Literature, accepting his award from Sir Howard in January 2002. - File 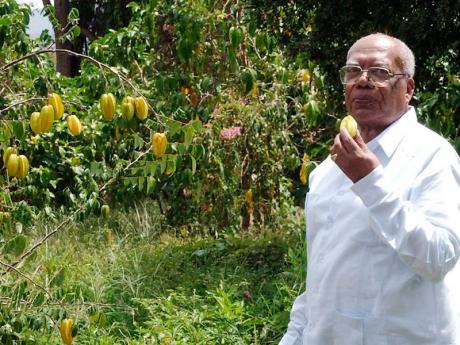 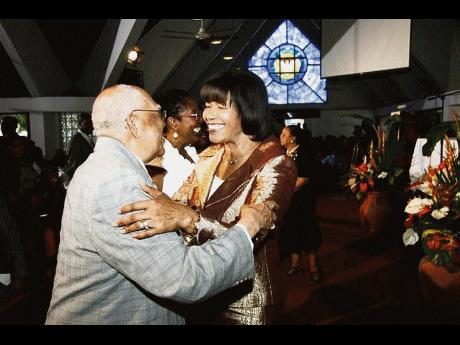 The nation has started to pay tribute to, and recognise the contribution of, former Governor General Sir Howard Cooke who died last Friday at the age of 98. Here are excerpts from some of the tributes received so far.

According to Sir Patrick Allen, Jamaica has lost a true son who devoted his life to serving its people and to working steadfastly for the growth and development of the land of his birth. Sir Patrick noted that the nation owed this statesman a debt of gratitude for being an exemplary servant leader, having dedicated approximately 70 years of his life to giving altruistic service as an educator, trade unionist, insurance executive, politician, government minister, senator, elder and lay pastor in his church.

"He truly understood and demonstrated what was meant by a life of service," remarked Sir Patrick.

"Sir Howard gave leadership with quiet dignity to the Office during times of turbulence. His peaceful demeanour as well as his willingness to sit with people and listen to their concerns, and to work with them, assisted in finding solutions for many of the ills that plagued Jamaica," added Sir Patrick.

"Sir Howard's legacy as a kind, empathetic, understanding father and friend will forever be etched in the minds of all those who interacted with him during his years of service. He walked with kings, but never lost the common touch, even after receiving two Knighthoods from Her Majesty Queen Elizabeth II, namely, the Knight Grand Cross of the Most Distinguished Order of St Michael and St George, and Knight Grand Cross of the Royal Victorian Order.

"As the elder statesman of the governors general and presidents of the region, he organised with his counterparts frequent meetings where they brainstormed and subsequently agreed on a common basis of operation. He assisted other member countries of CARICOM to bring the level of the Office of the Head of State to that which is comparable throughout the region.

"As the nation mourns this loss, let us perpetuate the memory of Sir Howard by recognising his life of service and leadership as we continue the nation-building process," urged the governor general. "He now belongs to the ages, and may his life and legacy be emulated by all Jamaicans."

It is with profound sadness that I have learned of the death of one of Jamaica's most illustrious sons and one of our gentlest souls, Sir Howard Cooke. It is impossible to overemphasise his contribution to this nation, which he has served with utmost distinction, passion and selflessness.

Ever since he became involved in public life in that pivotal year of 1938, Sir Howard's heart and mind have never wavered in commitment to the upliftment of his people.

An unflinching regionalist, it was fitting that he was elected to the West Indies Federal Parliament in 1958. When Jamaica's first independent Parliament was convened in 1962, Sir Howard was one of its distinguished members, serving as senator until 1967. Afterwards, he served as a Member of the House of Representatives between 1972 and 1980. During that period, he served as minister in the portfolios of pension and social security, education and labour and the public service. As governor general between 1991 and 2006, he served with distinction and grace.

Known as 'Teacher', he taught by precept and example indelible lessons of love, compassion, tolerance and fairness. Having spent 23 years in the classroom, beginning at his beloved Mico College and Practising School, he had a natural empathy and caring spirit. None could fail to be moved by his warmth, his broad, endearing smile and his captivating generosity of spirit. He embraced all and was a model of inclusiveness and non-partisanship.

Sir Howard Cooke was well known for his commitment to Jamaica's political life, having been a founding member of the PNP, having served in the Senate and the House of Representatives, and having served as governor general of Jamaica.

Fondly known as 'Teacher Cooke', he was also well known for his commitment to the education sector. Sir Howard began his public life as a teacher, and emerged as a leader, becoming president of the then Jamaica Union of Teachers.

We also take note of his assertion in a recent media interview that: "We are a great people, and we need to stop giving the impression that we are worthless ... . Look at the number of institutions we have helped to develop, the number of missionaries Jamaica has sent to minister in African countries and other parts of the world. Yet we tend to focus only on the sordid side of life."

As Sir Howard pointed out in that interview, all of us in Parliament, and ultimately all Jamaicans, have contributions to make towards the development of our country. We recognise him as a great Jamaican leader in education, politics, and philanthropy, Sir Howard Felix Hanlan Cooke.

There are only a very select few who have managed in their lifetime to change the course of our history and served to define so clearly the essence of a patriotic mission.

He was a brilliant student whose pedagogic skills made him one of our most successful teachers and a luminary in the field of education.

Howard Cooke was the youngest member of that progressive group entrusted to draft the constitution of the People's National Party. His political eminence is beyond question.

The final curtain call has now been answered by the last surviving federal member from Jamaica to the West Indian Parliament.

For 15 years, Sir Howard discharged the constitutional responsibilities of governor general with such exemplary skill, that additional functions were entrusted to him by bipartisan agreement and national consent

The nation has lost one of its most devoted sons. His legacy will stand forever as a monument to his work and a fountain of inspiration for generations to come.

Personally, I have lost a mentor and a colleague and one who was more than a close friend. Love and duty require that we must summon the strength and the will to give Lady Cooke and the entire family whatever they may need to cope in their bereavement.

The passing of Sir Howard Cooke has taken from us the last surviving pioneer of Jamaica's modern democracy.

His long and illustrious career began in 1938 at the tender age of 22 when he became a member of the steering committee that created the People's National Party.

In the 68 years that followed before his retirement in 2006, he gave outstanding service to his country in several capacities - as a teacher, president of the Jamaica Union of Teachers, lay preacher, member of parliament in Jamaica as well as in the West Indies Federation, minister of government and ultimately governor general.

In all his undertakings, he served with exemplary dedication and humility, and he has left a huge legacy that for a long time to come will be a source of reference for public service.

I extend my deepest sympathies to his family, and especially Lady Cooke with whom he would have celebrated 75 years of marriage later this month.