Prelude to a push - Did Bunting bow to international partners who wanted Ellington out from last October? 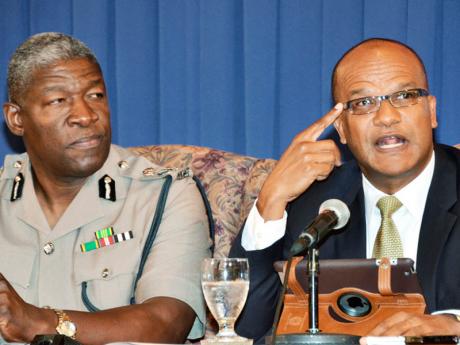 It appears a cave-in by National Security Minister Peter Bunting was the final straw which broke the camel's back to the sudden resignation of Police Commissioner Owen Ellington late last month.

Days after Ellington's spokesman, attorney-at-law Howard Mitchell, told RJR News that the commissioner was forced out by international pressure, Sunday Gleaner sources are claiming that the backing of Bunting was what kept the top cop in his job for several months.

"I don't know if he was pushed as much as he jumped! But there certainly was pressure at the top of the cliff," Mitchell stated in the radio interview

Now the sources say international partners, mainly American and British, have been pushing for Ellington's resignation since last October after the interim report of the public defender raised questions about extrajudicial killings during the May 2010 operation in West Kingston.

The international partners also expressed concern about the allegations of extrajudicial killings which were surfacing about members of the force in Clarendon.

"At that time, Ellington indicated to Bunting that he was willing to walk away but was convinced to stay by Bunting, who argued that the allegations did not indicate any wrongdoing by the commissioner, and that he would be willing to go to bat for the top cop," a Sunday Gleaner source reported last week.

But the relationship between Ellington and the international partners went downhill from there as they reduced the sharing of information with the police and left the commissioner out of the loop on many occasions while they probed activities involving Jamaican suspects.

"It got so bad that after a lengthy delay the Americans released a shipment of bullets for high-powered weapons to the force and stipulated that not one could go to some operational units, including the Mobile Reserves," added the source.

By March, with the pressure building and the relationship between Ellington and some international partners almost non-existent, the commissioner reportedly again indicated to Bunting that he was prepared to walk.

According to the sources, a year-end timetable was agreed on at that time as the security minister seemed no longer willing to expend the political capital to defend the commissioner.

But just about three months later, that timetable was discarded, raising questions about what had developed to make the resignation of Ellington a non-negotiable and most urgent issue.

"Whatever happened took place at the Cabinet meeting on June 23, the day it was announced that Ellington would be going off on leave and not coming back," declared the source.

While hinting that reports that Ellington's United States visa has been cancelled are correct, the source argued that there is no allegation of direct wrongdoing by the outgoing commissioner, so that should be resolved now that he is on his way out.

"Even if they took his visa that would just be part of the pressure to get him to go," argued the source.

"What happened is that the letter announcing his resignation was badly crafted, so this led to speculation, and it is unfortunate that the security minister is not out there more defending the man who gave more than 30 years of his life in service to the country."

Bunting has so far refused to add more to what came out in the release, while the American and British officials in Jamaica have not commented on the claim that they pushed out Ellington.