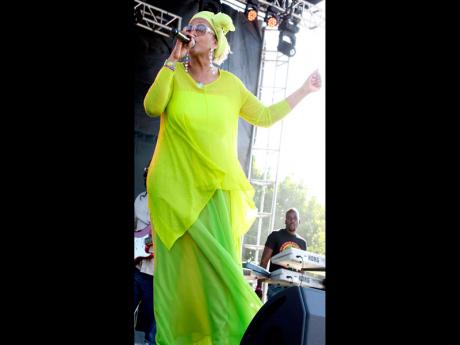 Griffiths made this green number all her own. 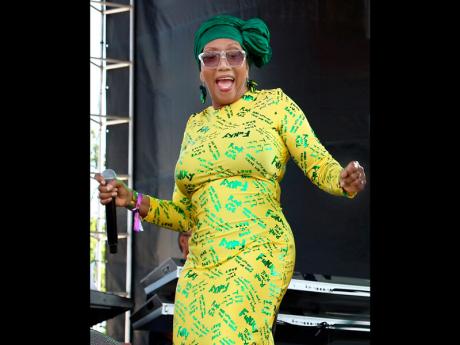 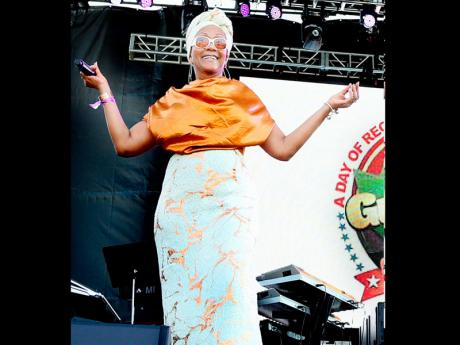 Griffiths in a shimmering bronze top and beige bottom with splashes of gold with matching headwrap that was created by the very talented Arlene L. Martin at Drenna Luna in Kingston.
1
2
3

"Female artistes don't have to be almost nude on stage to be sexy ... men get more excited when they have to fantasise about the goodies rather than having it splashed all over the stage".

The beautiful,
stylish and classy Marcia Griffiths was in New York City two weeks ago
for a special performance at the Groovin' In The Park Concert, in
celebration of her 50 years in the reggae music
business.

Predictably, she dazzled the older folks
with her impressive catalogue of singalong hits and she effortlessly
conquered a new generation of youthful music fans who were blown away by
her sweet, sassy sounds. But the undisputed reggae queen whose single
Electric Boogie is the genre's biggest selling single
by a female artiste, was also hitting other high notes - some high
fashion notes. Her journey onstage through five decades of music came
with several changes of haute couture outfits that
were as magical as they were mesmerising, and her captive audience
wallowed in every moment of the bold and exciting fashion
extravaganza.

"Unnu nuh see how Marcia outfit dem a
put the young gyal dem to shame?", a female New York radio host asked
aloud among a group of friends in the VIP section.

"A
real ting", a 30-something male radio jock nodded confidently. "She
always sell off."

After Griffiths' triumphant
performance, I caught up with her to see what drives her sense of
fashion.

Dave Rodney: Marcia, after your
blistering performance at Groovin', there was a lot of talk about your
drop-dead gorgeous outfits. How many changes did you make and who was
the designer for
each?

Marcia
Griffiths: Thanks for the compliment, Dave. I had a wardrobe
of six outfits, but I was not able to go through all of them because of
time constraints. My first outfit was a shimmering bronze top and beige
bottom with splashes of gold with matching head wrap that was created by
the very talented Arlene L. Martin at Drenna Luna in Kingston. I have
an eye for fashion and I always find things that are unusual. This
particular fabric was procured in Italy, and Arlene did a great job with
the design. My second outfit on the show was made from a yellow fabric
embellished with green musical motifs and it was sourced in the US and
was also designed by Arlene L. Martin, who is based at Pulse on
Trafalgar Road. This piece sparkled even more with tasteful accessories
from Cedella Marley's Catch-A-Fire line. The third outfit was a soft,
silky mint green ensemble from London, and I injected my personal style
and flavour to make it feel and look completely me. It was simple yet
elegant and stylish.

DR: Were the colours
significant in each outfit?

MG:
In a general sense, yes. The colours reflected the mood and
the vibe of my 50-year journey. In the case of the last mint-green
outfit, I deliberately chose that colour to blend in with what Sister
Judy Mowatt was wearing, which was green as
well.

DR: You clearly take
your styling very seriously. Is this passion from the I-Threes. touring
days with Bob Marley or is this something
recent?

MG: My love
affair with fashion began as a child, when I was eight years old. My
grandmother was a dressmaker in Hannah Town where we grew up, and as a
child, I would always adorn myself with beautiful fabrics. For years,
some people have come to my shows to see what I am wearing. I change my
style regularly and I don't stick to one specific flavour. Sometimes I
go African or Oriental. My mother was Indian so sometimes I go Indian
too. It all

depends on my
vibe, and I was happy for the opportunity to bring out my fashion sense
at Groovin' In The
Park.

DR: What types of
clothing are you most comfortable
with?

MG: I like anything
that makes me feel relaxed. I think I have a special eye for what works
for me, and bear in mind that what works for me may not work for
another person. I feel incomplete when my head is not covered with a
matching headwrap. As an artiste and a public figure, sometimes I am on
the street and folks want to take photos with me. So I like to always be
looking good, prepared and
ready.

DR:
You look as fit as a fiddle. Do you work out
regularly?

MG: When one
gets to my age, maintenance and taking care of oneself is very
important. I eat right and I avoid foods that are not good for my
metabolism. I also exercise at least four days per week, sometimes every
day except Sunday.

MG:
I am happiest with my natural look and I mostly stay away from
make-up, except when I am doing a show or a TV appearance. At such
times, I ask the make-up artist to go minimally on the makeup, using
just a little bit of the various
products

DR: How has
reggae fashion changed over 50
years?

MG: Reggae fashion
has gone through many changes over the decades. When I first started
out, I was a dresser for sure. There weren't too many women in the
business back then, but the men were dressers, too, wearing mainly
suits. Guys like Ken Boothe and the Heptones would dress to kill. Reggae
was heavily influenced then by the American trends, and we dressed like
they did. My idols were Patti LaBelle and Aretha Franklin. But with the
70s came Bob Marley and the I Threes, and 'rebel music' came into
being. Artistes started to break away from the suits and they wanted to
express their own personal style and individualism through fashion.
Roots fashion, and Rasta colours became chic. Now the trend is towards a
very casual and relaxed couture, so you hardly know the difference
between the artiste being on and off
stage.

DR: What advice
would you give to younger female artistes to keep looking attractive and
sexy onstage?

MG: First
of all, female artistes have to respect themselves, and love and respect
will follow. A female artiste has to carry herself with dignity. She
doesn't have to be nearly nude on the stage to evoke sexiness. In fact,
men get more excited when they are tempted to fantasise and wonder about
the goodies in the package rather than splashing it all over the stage.
Be dignified, not vulgar, and the sexiness will break through like the
sunrise in the morning.