Blake out for rest of season? 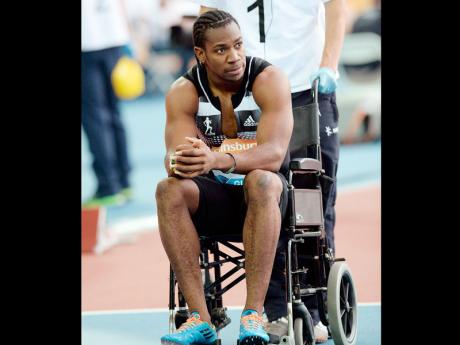 Yohan Blake leaves the track injured in a wheelchair after pulling up during the men's 100m on day one of the Diamond League Meeting in Glasgow last Friday. - File

Sprinter Yohan Blake may have ran his last race of the season, after checks yesterday showed that he had suffered a slight tear to his left hamstring, while competing on Friday at the Sainsbury Glasgow Grand Prix Diamond League meet at Hampden Park.

The 2011 world 100m champion is expected to be out for just three weeks but, while no official word has so far arrived, the Sunday Gleaner was reliably informed that the 24 year-old and his management team may very well shut the book on the rest of the season, for fear of more damage ahead of the busy 2015-2017 period, which has two World Championships (2015, 2017) and the Rio Olympic Games on the calendar.

Manager Cubie Seegobin did not deny the possibility, noting that the decision would have to be taken primarily by the Olympic double silver medallist and his coach Glen Mills.

"The decision on the season will have to made by coach (Mills) and the athlete though," said Seegobin, who has been managing Blake's affairs since he went pro in 2009.

Blake fell to the track after grabbing his left leg mid-way the men's 100m before being carted off in a wheelchair by medical personnel, prompting fears that he had aggravated a hamstring injury that kept him out of competition for much of last year.

However, as confirmed by Seegobin, Blake's latest setback is entirely new and unrelated to last year's injury.

"This has nothing to do with the right leg. We did a full MRI yesterday morning on his left leg and the injury was upgraded to an almost Grade 1 strain with a minor tear," said Seegobin.

"He has no stiffness in the leg, he does however have some soreness but with a full range of motion. The doctors say that in three weeks - just to be on the safe side, he can resume training," added Seegobin.

The sprinter is scheduled for additional scans in the coming days to confirm yesterday morning's results.

Blake missed most of last season and the chance to defend his 100m world title at the Moscow World Championships after suffering a hamstring injury, but sources have confirmed that this latest setback is totally unrelated.

Blake was scheduled to compete at the July 20 London Anniversary Games and again in early August.