Di Stéfano - one of the greatest 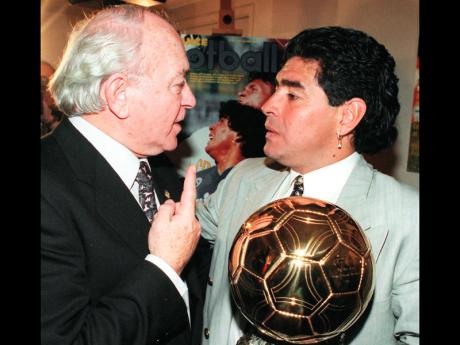 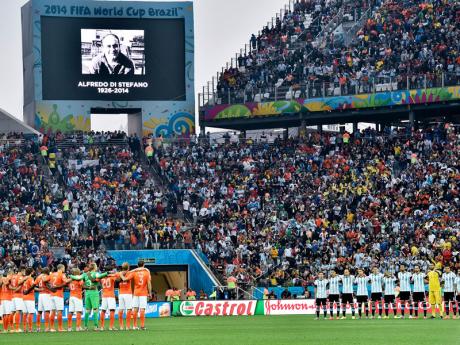 The Dutch (left) and Argentina teams pause to pay respects to late star Alfredo di Stéfano, who died on Monday, July 7, ahead of the World Cup semi-final match on July 9 in Sao Paulo, Brazil. - AP
1
2

Born in Buenos Aires, Argentina, on July 4, 1926, Alfredo di Stéfano, who died in Madrid, Spain, on Monday at the age of 88, was a centre-forward beyond the ordinary: he was fast and he was accurate, he was a master tactician, and he scored with gay abandon.

Known as 'The Blonde Arrow' because of his speed and his accuracy, he was one of football's first travellers, and he travelled because of money. It was as simple as that.

Playing first for River Plate in Argentina in 1942, his travels took him to Millionairos in Colombia in 1949, and from there to Real Madrid in 1953 where he stayed until the end of his days in 1964.

Scoring goals, in fact, was second nature to him, as it was to Pele, to Raul (Gonzalez), to Christiano Ronaldo, and Lionel Messi.

He was not only the top goalscorer in Spanish football for the years 1954, 1956, 1957, 1958, and 1959, but he also scored 49 goals in 59 appearances in the European Cup, six goals in seven appearances for Argentina, and for the other countries, which he represented with distinction, three in three for Colombia, and 23 in 31 matches for Spain.

Like George Best, however, di Stéfano never played in the World Cup. Partly because of politics, Spain never made it, and when they did, he found himself injured.

Everywhere that Real Madrid went, in the Santiago Bernabeu or the Nou Camp, the home of Barcelona, or at Hampden Park in Glasgow, the focus, the limelight was on di Stéfano.

One night, in May, 1960, Real Madrid took on Eintracht Frankfurt in the European Cup final at Hampden Park, and before a gathering of some 127,000 bewitched fans, Real Madrid, so it was reported, dazzled, bamboozled, and totally destroyed Eintracht.

Was di Stéfano the greatest footballer of them all? That is highly unlikely, even though he was once voted behind Pele, Maradona, and Cryuff during a poll in a Spanish magazine.

He was, however, and without a doubt, a legend and genius. Sometimes the greatness, the everlasting greatness, of a player is best judged by the opinions of those who did not see him play, the great players of later years who marvel at his skill and those who therefore share a kindred spirit with him

The words of players like Pele, Eusebio, and Maradona, who rated him among the game's elite players, were definitely correct. Those of Gary Lineker, David Beckham, Ronaldo, and Messi, who rate di Stéfano as arguably the greatest all-round player the game has ever seen, is pretty much near the truth as they can be.