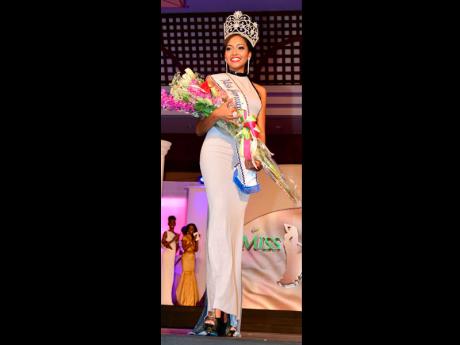 The 22-year-old Chin, outpaced 18 other finalists, walking off not only with the coveted crown, but driving home an Audi A3, courtesy of ATL Motors, a weekend at Sandals, a university scholarship, and the chance to represent Jamaica at the Miss World Pageant in London, United Kingdom, in December.

Second-place winner Shelliann Young was just as impressive, deserving to be placed in the top three.

The three beauties, who differentiated themselves from the pack during the event at the Montego Bay Convention Centre, were subjected to a poorly organised production, punctuated with bloops and blunders from the organisers. However, they held their heads high.

"It has always been my dream to be an ambassador of my country," Chin told The Gleaner after she was crowned. According to her, there was no clear winner during the weeks leading up to the coronation, and she never doubted the abilities of the women she was up against.

She is confident she can do well at the big event in London, stating, "I epitomize the theme of the competition, 'Beauty with a purpose'".

Chin underscored the importance of winning, saying she will continue her life goal of representing her country.

The new queen seemed unconcerned about the dissatisfaction shown by the large crowd to her winning the crown, posing instead in her new car, which she will have on loan for the next year.

Those shocked by the decision, spoke loudly at the coronation show, raising their voices emphatically, as they cried "no, no", booing the announcement. "You have named the right three, but not in the right order," members of the crowd shouted. They went on to argue outside the venue that Webb was cheated of the crown.

Webb, the most aware contestant, also won the prize for best smile. Her responses in the interview segment bowled over the audience, but seem only to have made a third-place dent on the judges.

Chin received the sectional prize for 'Best Figure', while Shanna Kay Ellis won The Gleaner's People's Choice Award. However, the winner of the $1 million Logistics Hub Essay Competition and trophy was not awarded. "This is a prize that was to be presented by the Caribbean Maritime Institute (CMI), and we were very disappointed because a contingent of 13 representatives travelled all the way from Kingston to present the award," said a spokesperson from the CMI.

The pageant, which is making its second call on the city of Montego Bay, offered over $15 million in prizes. These included 10 university scholarships valued at $6 million, of which nine are from the University College of the Caribbean, in collaboration with partner universities such as Florida International University, London University, Kursk University; a $1 million masters degree scholarship in Logistics from the CMI; training by Fusion Consulting Limited, gym membership by Spartan Health Club and gift packages courtesy of Morfose hair products and L'Oreal.