The joy of real love 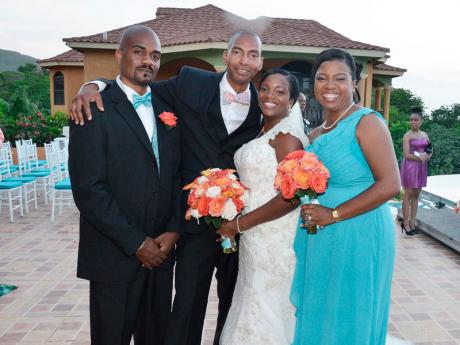 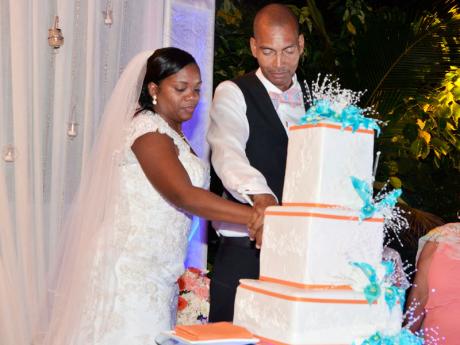 Tagging behind Mais were two youngsters carrying a sign, with the inscription, "This is your last chance to run". But Conrad had no intention of running, as he waited to embrace the woman he had cohabited with for the last five years.

Mais was ready to change her name to Allen, and her groom, who had obviously prepared for this special day, was anxious to make it official, in one of the most heart-warming, stirring, tear-jerking and beautiful wedding ceremonies to take place in western Jamaica.

The two met in 2007 while both worked as customer service representatives at Air Jamaica Express. However, they didn't start dating until seven years later. Conrad had moved to Kingston for those seven years and the two met again when he moved back to work at Alliance One, an outsourcing company at Montego Freeport. Tamara was, by then, at Apple Vacation as a resort representative.

"We spent a lot of time together, knew we had the same goals, and the family life was something we cherished. It was a slow process, until we realised we were the best fit for each other," Conrad told Flair. "We took our time to know we were ready for marriage before jumping into it. We were engaged for three years. I had to get it right, before I pursued and got her to marry me. I didn't think I was ready, I received guidance from my family, and made the leap of faith," he ended.

There was nothing that could mask Conrad's joy, even his feet betrayed him as they lost control, dancing to the tune of happiness on a swimming pool covered stage at the Milbrooks Resort in Spring Farm, Rose Hall, St James.

"I was extremely confident, I couldn't stand still while waiting on her on the day. I think the standing and waiting is what drives people crazy," a still beaming Conrad told Flair.

His pride shone brightly and for the first time, many of the wedding guests in attendance witnessed a groom taking over a wedding. This wasn't normal, but there would be nothing normal about the wedding of a couple who has accommodated several other wedding ceremonies themselves, via their popular event supply business, 'Cover Me Up Tents'.

For their own event, the setting was intimate, with a very classy decor created by the expertise of renowned wedding decorator, Paulette Henry of Blooming Designs. Her work of art was evident by the chairs, tables, pink and blue tablecloths, and how she transformed an already fabulous location into an oasis of love.

God had smiled upon the couple on the day of their formal commitment on July 5, and the officiating minister, Dr Richard Keane, made sure to remind the happy groom that it was his responsibility to maintain the marriage.

"It is the husband's responsibility to make everything work for his wife," said Keane, just before performing a ritual, that included the exchange of rings, and the symbolic sand ceremony, read by the grooms' daughters Tiana Ward, Jasymn and Ashley Allen.

In the midst of the Saturday afternoon, with the ocean forming the backdrop, the voice of cabaret great, Georgia Henry, backed by Janet Cox serenaded the couple with the compelling words to the song, "I know I will never love this way again".

Henry, a staple on the hotel scene and a friend of the couple, did a selection of ballads, each telling a story of the love shared between the newlyweds.

The wedding ceremony was followed by a garden reception officiated by Simon Casserly, who didn't spare his wife Kerry-Ann, when the time came to warn the couple about what to expect in married life.

Casserly's position as emcee was interspersed with contribution from the groom, who took charge as 'master of ceremonies', paying tribute to every member of the audience, going from table to table. This was fun-filled, titillating and excitingly fresh.

There was no doubt in anybody's mind, particularly, Tamara Mais' best friend of 20 years, Helen Tyson, who said, Allen had married a virtuous woman, who was charming, intelligent, resilient and passionate.

Mr and Mrs Allen will honeymoon in Cancun, Mexico.