Pulse's Jeneil on the cover of 'Vogue', again! 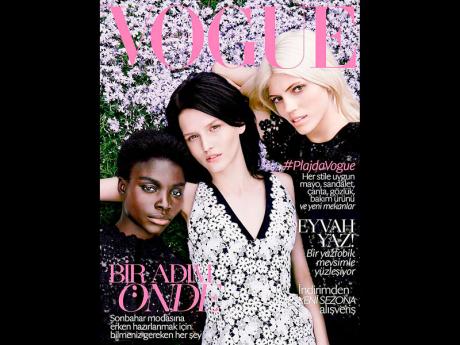 Like an unstoppable force, Pulse's Jeneil Williams maintains a fashion momentum unequalled by anyone from the Caribbean region and equal to the very best in the world.

The i-D, Love, French, BMM and Wall Street Journal covergirl, is on the cover of Vogue again! This time it's the Turkish edition of the world's #1 fashion glossy.

Although this type of success has become somewhat commonplace for the ebony Jamaican beauty, Jeniel is nonetheless elated by this latest coup, given that the cover of Vogue is every supermodel's dream. It is also less and less of a reality these days, as in recent times, Vogue covers seem reserved for stars of film and music such as Rhianna and Charlize Theron.

Jeneil shares the Vogue cover with Estonian Katlin Aas and American Devon Windsor. Shot by Jem Mitchell in New York, the two-day shoot featured a range of designers and amazing styling. This current issue of the magazine marks another top-tier assignment for the hard-working Williams, whose résumé is among the best in the world and especially so among black models.

Williams has not only become one of the most recognisable supermodels in the world, but is clearly the most successful covergirl that the Caribbean has produced. One aspect of Jeneil's career that has gone largely unnoticed has been her special relationship with fashion legend Karl Lagerfeld. When he met Williams a few years ago, Lagerfeld immediately fell in love with her beauty, radiance and style. In short order, he shot her for Pirelli, long known as the world's hottest calendar. The launch of the calendar in Russia was a standout event, attended by a virtual who's who of the European fashion majors. Specially invited for the launch, Williams enjoyed pride of place.

Lagerfeld again chose her for another key assignment; this time his new Diet Coke campaign, produced in Karl Lagerfeld branded limited edition. Yet again, Williams had arrived at a new place, a new level of success.

Always a pacesetter, the style maven continues to do her local and international agencies proud with her varied triumphs and accomplishments. Her growth and prowess are demonstrated with the publication of each cover, editorial spread and lead campaign.

Williams was discovered by Pulse through its Caribbean Model Search.