On the brink - Portland homes face collapse amid shifting Earth 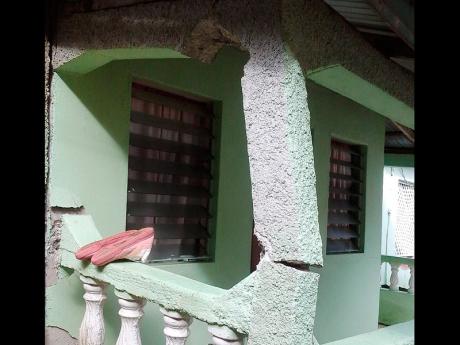 A look at some of the damage caused to homes at Gauff Road in Portland as a result of earth movement. - photo by Gareth Davis

Fearful of collapse at any time, especially during rainfall, residents at Gauff Road in Portland are living on the edge as repeated earth movements have displaced sections of their concrete homes.

Cracked verandah and bedroom walls, ceilings, bathrooms, and just about every section of the concrete structures occupied by 20 homeowners are now in danger of collapsing as with each downpour, cracks in the walls are widening, exposing steel and other metals that were used by builders to tie and bind cemented walls in place.

"Mi can't sleep when rain a fall," commented 40-year-old Tyrone Amore, a taxi driver and owner of a three-bedroom concrete house on Gauff Road, who also acted as spokesperson for the 20 homeowners.

He added: "The column and beams are pulling apart, and any minute now, the roof can collapse. Each of us living in this vicinity is affected by the Earth's movement. It started one night, more than two years ago, during a heavy rainfall, and I remember waking up to some strange sounds coming from the walls of this house. It was as if the walls were crying out with a creaking sound and the house was vibrating. I thought it was an earthquake, and since then, our situation has worsened with each rainfall."

Amore told The Gleaner that he and others first complained about the widening cracks to the Portland Parish Council, which promised to look into the matter, but that promise was never kept. He said that despite a visit to the area by an assessment team from the Ministry of Labour and Social Security following the passage of Hurricane Sandy in 2012, which ravaged their homes, their plight has been ignored.

Dexter Rowland, councillor for the area, said that the council was aware of the situation facing the residents.

According to Rowland, a team from the geological survey office in Kingston visited the area more than six weeks ago and met with the residents.

"I am in sympathy with the homeowners," said Rowland.

He added: "It is a disaster waiting to happen, and many of these homeowners stuck to the task of building their house - one block at a time. It cannot be that we are going to sit idly by and allow a disaster to take place and possibly claim the lives of some of those residents. They have to be relocated, and I am urging the Government to intervene in this process so that the homeowners can take up the relocation offer."

But with the Atlantic Hurricane Season already under way, there is added fear that any tropical storm could make their already bad situation worse.

The homeowners, some of whom have been living in the area for the better part of 40 years, including 68-year-old Cynthia Stewart, are struggling to come to grips with the heart-rending situation of losing their homes.

"This has never happened before," Stewart said.

She added: "I grew up in this neighbourhood with my parents, who are now deceased. This is my home, and I worked and toiled hard to build this four-bedroom house, which was completed in 1998. I am willing to relocate once the Government can provide me with suitable land space. Where there is life, there is always hope, and I have three grandchildren living with me. And although starting all over is going to be difficult, living is important."

For the remaining 18 or more homeowners, relocating at this time is the best thing for them as sleepless nights during the sound of a downpour have rattled their nerves and kept them on edge as they ponder whether their homes will collapse, leaving them trapped inside or possibly dead.