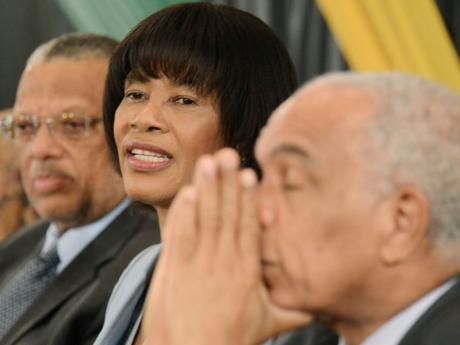 The Regulations Committee of the Senate ought to be commended for its decision not to countenance a proposed amendment to the law that would remove public transportation from the jurisdiction of the Office of Utilities Regulation.

Transport, Works and Housing Minister Dr Omar Davies, acting on behalf of Prime Minister Portia Simpson Miller, had tabled a ministerial order in the House of Representatives seeking approval to remove public transportation from the OUR.

But despite the guidelines on the Cabinet submission indicating that consultation is a mandatory part of the process where there is to be a submission to the Cabinet, Simpson Miller, being the responsible minister for the OUR, failed to speak with the regulator on the matter. Instead, what happens is that a ministerial order is laid in Parliament and left for the process to run, almost in the hope that the country will ignore a flagrant breach of process.

Thankfully, the OUR, when it appeared, first before a House committee on Tuesday and then a Senate committee on Friday, alerted legislators to the egregious wrong being done. Equally important in ensuring the integrity of our governance systems is the role of the parliamentary Opposition, which was like a hungry watchdog as it demanded immediate remedy for the situation.

During Friday's sitting of the Senate committee, Kamina Johnson-Smith recommended that the order be annulled until there is more clarity on the matter. Now, let us recall that the regulation was laid on June 17, 2014, and Tuesday was the statutory deadline.

Under the law, regulations such as the one to strip the OUR are to be laid before each House of Parliament, and if either House, within the statutory period, resolves that the regulations be annulled, the regulations shall be void as of the date of the resolution.

One wonders whether it is that the Government was not seeking to slip a fast one past the Jamaican people when it waited until the eleventh hour to have the Regulations Committee of the House consider the matter.

Perhaps it is the case that the Government was hoping that the OUR would be mute on the matter and that no one would be alerted to the fact that no consultation had been done on the issue.

This matter has not only called into question the commitment of the Government to strengthening governance across the board, but it also begs the question about whether the technical persons within the state apparatus are providing the best advice. The question is of fundamental importance when one considers the vast number of amendments, sometimes rewrites, that are being done to bills that have been tabled in Parliament recently.

Clearly, something is broken somewhere. It could be that the technical people are either burnt out, or are not up to the task, or even that the Government has been blind and deaf to sound advice.

We accept that there is a need to correct what has been described as an anomaly in relation to the OUR's regulatory function and supervision over public passenger transport operations, but the approach cannot be for the Government to ignore its own rules. Consultation is a must!

In the meantime, The Gavel is heartened by statements from Horace Dalley, minister without portfolio in the finance ministry, who said in the House on Tuesday that the Government was forging ahead with public-sector reform.

"It should be well understood by now that successful implementation of public-sector transformation, pension reform, and the overhauling of the public procurement regime are essential to meeting the targets and goals of the economic reform programme," Dalley said.

Given the importance of the economic reform programme to our collective future, Dalley should ensure that the public gets a front-row seat in the transformation theatre. One good strategy he could adopt is for all ministries, departments, and agencies within government to publish a matrix, with accompanying timelines, of their reform targets.

It is not sufficient for him to talk about managing the complexity and the overall construct of the public sector. He should lay bare the kind of reforms each public-sector entity would undergo and outline a clear strategy to deal with sensitive issues such as the sustainability of some allowances payable in the health sector such as on-call, overtime, sessions, which are unbearable burdens on the backs of the taxpayers.