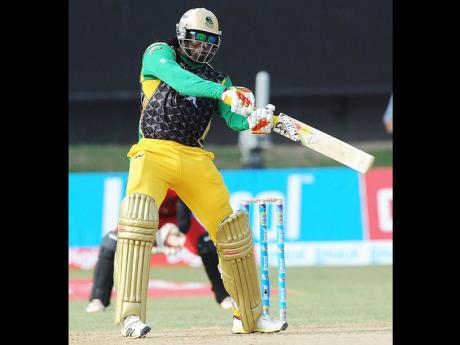 Chris Gayle says adjusting his usually attacking instinct and playing according to the bowling of the opposition was key to scoring a hundred in Jamaica Tallawahs' seven-wickets win over St Lucia Zouks in their Limacol Caribbean Premier League cricket match on Saturday.

The big-hitting opener, who in achieving the feat also registered the two-year-old tournament's first century, slammed 10 sixes and five fours during an unbeaten 111 off 63 balls.

The innings, which formed the backbone of the Tallawahs innings, also propelled the victors to 163 for three off 19 overs. This was in chase of the Zouks competitive total of 161 for five off 20 overs.

"Sometimes I play off instincts, but in this match I kind of changed it up," said Gayle.

"I said the only bowler that might do damage was (Sohail) Tanvir, so I didn't take many chances with him, I tried to play him around and went after the other bowlers.

"I was also able to get support from the guys, which in the end made my job easier."

Opener Chadwick Walton, with a quick 23 off 12 balls, Jermaine Blackwood, who made eight off 18 balls and shared in a 64-run second wicket stand with Gayle and Australian Adam Vogues, 15, were the other run-makers for the Tallawahs.

André Russell, who did not face a ball, was the other not-out batsman.

Gayle, whose charges will now turn their attention to the second match against hosts Guyana Amazon Warriors on Friday, also gave credit to his bowlers, for doing well on what he described was a 'good wicket'.

"It was a good wicket to bat on, so credit must go to the bowlers to restrict them to 161," he said.

Russell, with two for 27 off three overs, led the bowling for the Tallawahs with Daniel Vettori, Rusty Theron and Nikita Miller all ending with a wicket each.

Miller was particularly impressive in his spell, going for a mere 11 runs off his maximum four overs at a miserly rate of 2.75.