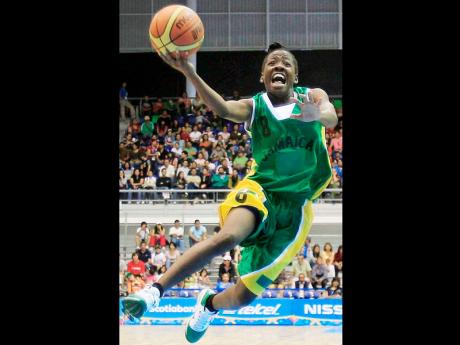 Shooting guard Sasha Dixon also scored 14 points and power forward Jennifer George got 13 for the team that almost didn't make it to the tournament because of the lack of funding.

It was a one million dollar donation from sprinting icon Usain Bolt that helped the team raise the $3.5 million it needed to participate in the tournament held in the US Virgin Islands.

Jamaica were always in control of the final match. They led 14-12 after the first quarter and went into half-time tied at 22-22 after being outscored in the second, 8-10 by their rivals. However, the Jamaicans won the third quarter 12-8 and held off a late rally by the Dominican Republic to seal the fourth 17-15.

The Dominican Republic's bench kept their team in the game, outscoring the Jamaican bench 19 to Jamaica's one.

Jamaica went unbeaten in the tournament, winning all their matches in Group B. They defeated Guyana 86-26, St Vincent and the Grenadines 55-22, before defeating Trinidad 49-35. The team that last won the tournament in 2006 went on to defeat the US Virgin Islands 49-46 to advance to Saturday night's final.

Coach Simone Edwards said support from the Jamaican and Guyanese community helped the team overcome adversity and claim the title.

"We were overwhelmed with the love and support from the local Jamaicans and the Guyanese were giving us. As a team we knew this was our gold despite everything and I am so proud of my players," she said.

Several players competed with injuries that they were not able to get treated because the team did not have a physiotherapist, but Edwards, a past Women's National Basketball Association (WNBA) champion for the Seattle Storm, said the team was taught to ignore the distraction and focus on the goal of winning the championship. She said more than three-quarters of the players were hurting going into the final match. The impact of their collective discomfort was mitigated with painkillers and a few hours at the beach, Edwards said. Also, she hailed Smith's captaincy, noting that it kept the team together and focused.

"We did it with good leadership from Shenneika Smith, and the closeness these young ladies exhibited," she said. "There was no way I had any doubt about a breakdown. They all lead in their own (way), but Jennifer and Shenneika really showed why they were drafted into the WNBA."

Smith, who played in Spain, was drafted by the New York Liberty, while George was signed by the Indiana Fever.

Meanwhile the US Virgin Islands defeated Trinidad and Tobago 65-52 to claim third place.