Scolari: Federation to decide his future 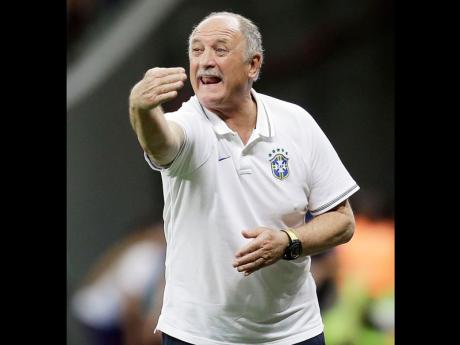 Brazil's coach, Luiz Felipe Scolari, yells instructions to his players during the World Cup third-place football match against the Netherlands at the Estadio Nacional in Brasilia, Brazil, on Saturday. Brazil lost 3-0. - AP

Luiz Felipe Scolari declined to make a decision on his future on Saturday, saying it will be up to the Brazilian football confederation to decide whether he will continue as Brazil's coach after the World Cup.

Following Brazil's 3-0 loss to the Netherlands in the third-place match, Scolari said he will let the confederation analyse his performance and decide whether he should remain as coach, despite failing to succeed at the home tournament.

The coach, who was loudly booed by the crowd in Brasilia, said that it's not up to him to say whether he will stay or leave.

The confederation has hinted it wants Scolari to remain with the national team, but nothing official has been announced.

"It's the president (of the confederation) who has to decide," said the 65-year-old Scolari, who led Brazil to the 2002 World Cup title. "We had already agreed that after the tournament we would hand over the command regardless of whether we won or lost. I will turn in a report to the president, and he will analyse what he wants to do."

Since his second stint with the national team began in late 2012, Scolari led the team to 19 wins, six draws and four losses. Brazil won last year's Confederations Cup, the World Cup warm-up tournament, under his command. He had promised to win the World Cup at home, saying it was Brazil's obligation.

Confederation president, José Maria Marin, has not spoken publicly since Brazil were eliminated from the World Cup with a disastrous 7-1 loss to Germany in the semi-finals, the national team's worst defeat in its 100-year history. He had said before the tournament that he would like Scolari to remain as coach no matter what happened with the national team.

"We will show our report to him, and we will see what happens," Scolari said. "My life goes on regardless."

The coach was largely blamed by fans and local media for picking a line-up that was too offensive against Germany. He apologised to fans after the loss, but said he thought his work with the national team was good until now.

"We didn't have great performances, but we were reaching our goals," Scolari said. "We still finished in the top four. I don't think we can't criticise the national team."

Injured striker Neymar showed up during Scolari's news conference after Saturday's loss, hugging the coach and saying a few words to him before leaving.

Brazil's next official tournament is the 2015 Copa America. The team is expected to play four friendlies this year, the first one against Colombia on September 5.