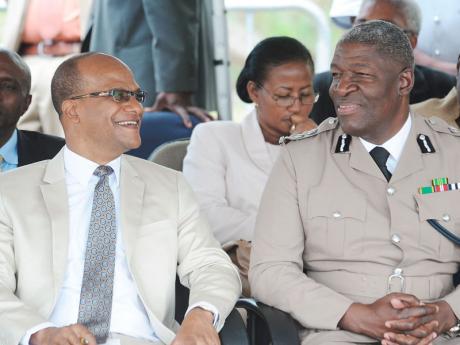 DISCUSSIONS ON a successor to retiring Commissioner of Police Owen Ellington are to top the priority issues the Police Service Commission (PSC) will deliberate on when its members meet later this month.

PSC member Dr Marshall Hall told The Gleaner yesterday that the commission has not yet discussed plans to replace Ellington but indicated that urgent steps would be made to install a new top cop.

"The Police Service Commission would meet and go through the process of how we will do it, but I think we want to do it quickly," Hall said.

He noted that the vacant position would be advertised and persons within or outside of the force could submit applications.

There has been ongoing debate about who will succeed Ellington following his sudden departure on July 1, 2014. Ellington said he wanted to separate himself from the leadership and management of the force before the start of the commission of enquiry into the conduct of the operations of the security forces in West Kingston during the 2010 state of emergency.

The outgoing commissioner said his retirement, at the completion of his vacation leave, would also allow the Independent Commission of Investigations to conduct its probe into the police death squad matter in Clarendon.

When the job of commissioner of police became vacant following the resignation of Rear Admiral Hardley Lewin on November 1, 2009, the PSC invited persons with the requisite qualifications to apply for the post - a position which involves leadership of the Jamaica Constabulary Force, the team of policemen and women responsible for crime fighting and law enforcement in the island.

The PSC also said then that it was seeking to identify a suitably qualified candidate within or outside the force to fill the post.

Already, the Police Federation has sent a clear message to members of the PSC that it has no doubt that the appointment of a new commissioner would come from the "many qualified members of the Jamaica Constabulary Force".

Several senior police personnel are being touted to fill the position. The likely front-runners from the force all hold the position of deputy commissioner. They are Delworth Heath, Clifford Blake, Linval Bailey, James Golding, Carl Williams and Glenmore Hinds.

Meanwhile, the abrupt retirement announcement of the 52-year-old Ellington and the explanation given for his departure continue to fuel public debate over whether he was pushed and why.

Sunday Gleaner sources say international partners, mainly American and British, have been agitating for Ellington's resignation since last October after the interim report of the public defender raised questions about extrajudicial killings during the May 2010 operation in West Kingston.

Claims of a police death squad in Clarendon and allegations of extrajudicial killings in the parish also reportedly triggered concerns among international partners.

The questions were tabled by Derrick Smith, opposition spokesman on national security.

But before Bunting responds to Smith's questions, he will make a statement to Parliament, the subject of which is expected to address Jamaica's relationship with its overseas partners, particularly in the area of national security.