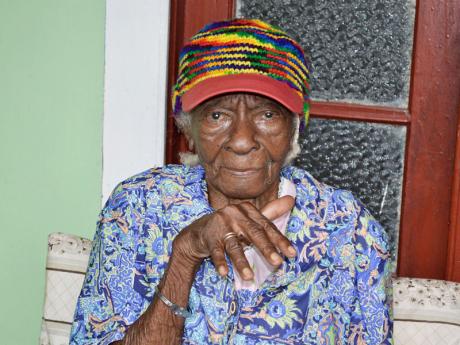 Seventy-eight years after The Gleaner was established, Kathleen Maud Edwards was born in Sturge Town, St Ann. It was June 22, 1912 - 102 years ago. When The Gleaner visited her in the community of her birth in May, the petite, silver-haired widow had all her faculties intact, and her characteristic sassiness was bubbling as the spring from which she has drunk water all her life.

Sassy but endearing, the woman known as Miss Kathleen is. Add witty and hilarious to her character traits, but what really stands out is her candour. She tells it like it is, sometimes in a loud voice. "Mi affi belch it off, and it feels better," she said. And she is no walkover by any means. "No sah, saucy from mi born," she will tell you.

This 'saucy' centenarian, who goes to the doctor every month, seems to be in excellent health, despite having diabetes since 1955 and hypertension since 1962. She said she doesn't feel old, although she knows she is old. "Mi no give up to be old," she said, while fidgeting.

"Mi don't even know wha name pain," Miss Kathleen said, though she can spell it in a jiffy upon request. The painlessness and vigour cause her to feel 'haunted', she said, when she has nothing to do. And when this lover of soup and porridge feels haunted, she weeds grass, carries stones, and sews. Also, she still reads her Bible. Her relationship with God started when she was 12 and her mother told her she was no longer responsible for her.

The offloading of her mother's responsibility for her sent Miss Kathleen into a state of depression. "An a worry, an a fret, an a cry," Miss Kathleen recalled. The burden was so heavy that one day while she was on the way to the river to fetch water, she dropped her pail and had a chat with 'Father God'.

Back home, she confronted her mother about the matter, only to be told that it was actually responsibility for her 'sins' that her mother had given up. Miss Kathleen said she was relieved, but the experience had brought her closer to God. She said she still has Him, but sometimes she slips up. She cannot forget the day when she was 'converted'. After the baptism, she who said she was quite 'sensible' felt 'fresh and nice'.

Being sensible seems to be a quality that was genetically bequeathed to Miss Kathleen. "I born and come hear that all the sensible slaves were dropped in Sturge Town," she said. When asked why, she sharply said, "Mi nuh know," but quickly added, "It's a special place, you know. Special indeed."

Sturge Town, located in the Dry Harbour Mountains, is one of the first free villages set up shortly after Emancipation. As in the other free villages, development in Sturge Town has festered, but Miss Kathleen belongs to a long line of people in Sturge Town who have made it past the century mark. There is a schoolmate who is also 102. Her 100-year-old neighbour died very recently. Her brother-in-law, Dick Tracey, died at 109, and there was a woman, it is claimed,who lived to 119, to cite a few.

They have attributed their long life to the Marley Spring water, which is the main source of drinking water in this hill-and-cockpit community. "That water, eh, it's uncomparable (sic)!" Miss Kathleen declared. Upon a jovial request that she send some of the water to Kingston, she agreed, but she said with a mischievous grin, "As long as yu wi pay mi." Getting paid for work done is something she is serious about.

When she said singing was her 'lines' at school, where she attended barefooted, a song request was made. She cleared her throat, and then delved into Under His Wing. She closed her eyes and sang clearly, not missing a word or a line. The shaky cadence of her voice and her timing were touching, to say the least, and when she was finished, there was silence for about 10 seconds. Then she broke it with, "Wha, I can take cash! Pay me! Yuh mik hase pay mi!" That was another hilarious moment for all present.

When asked if she was married, Miss Kathleen quickly stretched her arm and spread her fingers, and said, "Yes, honey," with pride. But her voice dropped and her demeanour changed when she asked about her husband. Joseph Tracey had made the transition in 1974.

She got married to her 'honeybunch' at age 27, and spoke proudly of her 'three-storey' cake from which she cut a 'block'. It was out of sheer love for the man she met in her community.

"Mi love him, and him love mi. Wi married fi love," she said, which is unlike what is happening nowadays. "Some woman only love man fi wha dem have," she asserted.

But, Miss Kathleen herself didn't only love Joseph for the love of Joseph. The man for whom she bore six children was a great cook. "The man could cook sweeter than woman, eh nuh," Miss Kathleen recollected. She was beside herself with pride for her sweet-fingered husband, who died as a result of blood-clot complications in his brain.

At 102, Miss Kathleen is looking towards 103, "if it's the Lord's will". But, she said, she is also ready for the transition. "A mussi because mi so ready why mi no gone yet," she opined, "really and truly."

And when that transition is made, she said nobody should say anything bad about her because she "live good wid everybody". And though Miss Kathleen is living with no regret, loving the life she lives, she concedes that, should she live it all over again, she would be a quieter woman.