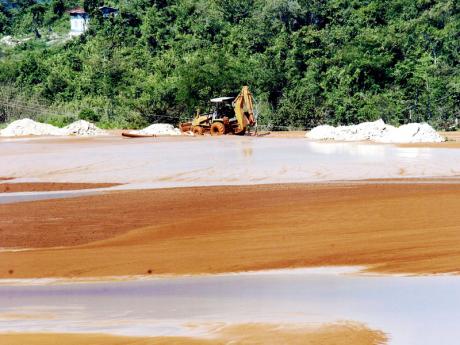 Investment promotion agency, Jampro, is assessing a new offer from a foreign investor interested in the extraction of rare-earth metals from Jamaica's bauxite waste, Wednesday Business has learned.

The interest is growing amid reports that the studies under way by Nippon Light Metals of Japan in partnership with the Jamaica Bauxite Institute (JBI), are showing promising results.

Nippon put in an application last year to patent its extraction process, according to the Jamaica Intellectual Property Office (JIPO), which said approval could take about three years from application.

Meantime, Jampro is actively promoting 'red mud' exploration as "a lucrative emerging segment of the mining sector which is expected to grow in the medium term".

However, reliable sources tell Wednesday Business that a second company has expressed interest in prospecting for rare-earth metals, and has outlined a research and development programme to Jampro costed at US$500 million.

"They are approaching things differently. While some testing till be done abroad, they will also be using the laboratories in our local universities," the source said.

Nippon is said to be still going through its feasibility phase, which one source said may extend another two years before the company moves to the extraction phase.

The JBI-Nippon agreement was struck in September 2012. The Japanese company's initial plan is said to have indicated a timeline of two to five years of study. The pilot phase itself was to last six months.

Worrell Lyew You, director of process monitoring and environment at the JBI, said last week that "the pilot phase of the project is being finalised", while noting that Nippon was awaiting "decisions". He declined to clarify.

Energy Minister Phillip Paulwell declined comment on Nippon's progress, saying he would be giving an update on the pilot phase of the project in Parliament in two weeks.

Our source said that while Nippon had targeted two red mud lakes for exploration and testing, the other prospective investor company had listed three. He said both projects could be accommodated were they to move to the commercial extraction phase.

Nippon is a publicly traded company headquartered in Tokyo. To date, an estimated J$500 million has been spent on its research facility located at JBI's Old Hope Road complex. The facility is the base from which the samples collected during the six-month pilot were analysed.

During the pilot, researchers from Jamaica and Japan were expected to treat some 30 tonnes of dry red mud to potentially extract 17 rare-earth elements.

Paulwell said the report on the pilot programme, which sought indicators for commercial production, was now complete and that he would release it in Parliament.

Rare-earth elements are vital to the manufacturing of electronics such as smartphones, plasma screens, wind turbines, satellites, and numerous other high-tech products.

Nippon's application to patent its 'Method of Recovering Rare Earth Elements' was filed in March 2013.

It is said to be one of 52 applications related to rare earths, but Jason Wongsam, assistant patents manager at JIPO, said Nippon appears to be the first seeking to patent a method of extraction.

The process of approval includes assessment by the government chemist or the Bureau of Standards Jamaica, which will have to conduct the research required, said Wongsam, in explanation of the estimated three-year timeline for approval.

He suggested that the process might be accelerated by applying for patents in a more resource-rich jurisdiction such as the United States or the United Kingdom, as JIPO may opt to accept the results from examinations done by a foreign patent office.

As outlined by Jampro, local red mud deposits in Jamaica boast up to 2,500 per cent higher concentration of these elements than global competitors.

Rare-earth oxides, which are used in high-technology and environmental applications, are currently being traded at rates of up to US$3,500 per kilogramme, the investment agency says.

Transparency Market Research, a company providing market reports and forecasts, says on its website that the global demand for rare earths was estimated at more than 140 kilo tons in 2010 and is expected to grow annually at about 10 per cent up to year 2018.

China is currently the dominant supplier of rare-earth metals, accounting for about 95 per cent of global supplies, according to Transparency Marketing.