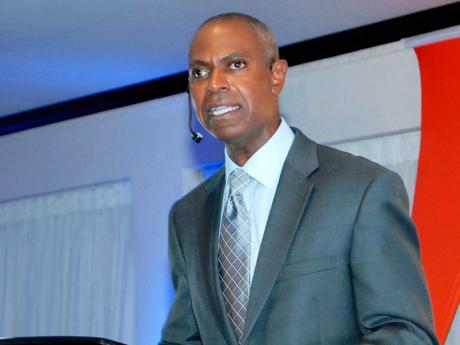 Gervase Warner, president and CEO of Massy Group, explains the company's new unified brand at its launch in Kingston at The Jamaica Pegasus hotel on Monday, July 14. - Colin Hamilton/Freelance Photographer

Gervase Warner, president and CEO of the Neal & Massy group of companies, said - Monday that the conglomerate is weighing additional investments in Jamaica's energy market, notwithstanding the challenging economic conditions.

At the Kingston launch of the company's new corporate brand, Massy, Warner said his company has broadly been seeking investment opportunities here, but has failed to land some of its acquisition targets.

"We have had a few attempts, but not succeeded in some of the acquisitions we have been looking at. I would say Jamaica is an economy you have to know what you're doing. There is money to be made, but it's also an economy that is struggling to grow," he told Wednesday Business when prodded on Massy's strategy for Jamaica.

"If there is a place where we know it would make sense to invest is in something that reduces the import bill for Jamaica and [makes it] more energy-independent or less dependent on fuels, which are not so tightly tied to oil," Warner said.

He declined to identify the projects underway, saying it would be viewed as a forward-looking statement, but Massy Group has previously noted that renewable-energy projects are included in its expansion plans.

In April, the company announced plans for a TT$1.2 billion bond placement, of which TT$700m would refinance its debts, while the rest, after expenses, would fund its Caribbean acquisition and expansion programme.

The 90-year-old company, with assets in most English-speaking countries of the Caribbean, has business lines spanning retail, consumer finance, automotive and industrial equipment, energy and industrial gases, information technology, and other investments.

The group has begun rolling out its new brand, depicted by its new orange and blue logo, to unify the group.

The strategy, Warner said on Monday, calls for collaboration instead of competition, with subsidiaries becoming more interdependent.

In Barbados, for example, supermarket space is being utilised for motor vehicle and other product promotions, he said.

Warner declined to specify the cost of rebranding, saying the figures would be included in the next earnings report due for release in August, though he did say it was estimated to be "tens of millions" of TT dollars.

Massy, in a release provided at the Kingston event, said it would be using the "critical mass of more than 40 retail locations" throughout the Caribbean to create a "distribution ecosystem" that connects suppliers and customers in and outside the region.

The conglomerate has introduced a Massy Loyalty Card in countries where it has consumer businesses in its insurance, financing and supermarket segments.

Jamaica is so far excluded from the loyalty programme.

The document notes that the rebranding exercise will not affect the legal identity of each entity, nor, according to Warner, will it lead to consolidation of operations.

"We have done no amalgamations or consolidations as part of this rebranding. We do that from time to time as an ongoing part of our business, but there is nothing that has been done specifically as part of the rebranding," he said.

In its last annual report, for year ending September 2013, Massy said Jamaica's contribution to group profit declined by 24 per cent, largely driven by the currency depreciation and underperformance of NMH Trading & Distribution (now Massy Distribution Limited). It cited the same reason for underperformance of its local LPG business, which contributed to losses in the group's oil and gas business line.

However, Warner was upbeat on Massy's local operations.

"We have three very, very good companies here in Jamaica - Massy Gas Products, Massy Distribution and Massy Technology. They are well-run organisations," he said. "They do well [and] they make contributions to the Jamaican economy."

Massy is a TT$9-billion company by revenue and a TT$8.9 billion operation by assets, according to its 2013 report. The group has a net worth of about TT$4 billion.