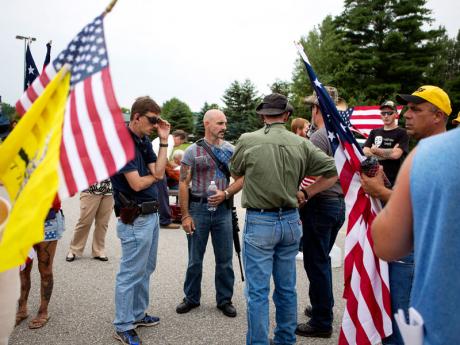 Protestors, some exercising their open-carry rights, assemble outside the Wolverine Center in Vassar, Michigan. They oppose the housing of detained immigrant children at the facility. - AP

About 50 people turned out to protest a social services organisation's proposal to house child immigrants from Central America in a small Michigan community amid escalating debate about the plans.

Meanwhile, the head of the Catholic Diocese of Saginaw is calling for compassion following the proposal from Grosse Pointe Park-based Wolverine Human Services, which said it wants to enter into a contract allowing the facility to house children who fled violence in their home country.

Tamyra Murray, an organiser for Michiganders for Immigration Control and Enforcement, led Monday's march from Vassar City Hall to Wolverine Human Services' 145-bed Pioneer Work and Learn Center, about 70 miles northwest of Detroit. Some of the marchers carried US flags, rifles or handguns.

"We must act," Murray said, according to The Detroit News. "We must save America and stand up against this invasion."

The plans come as pressure continues to mount on the federal government to treat as refugees the thousands of children travelling alone from Central America and crossing the border into the US.

Many of the 57,000 young people, who have arrived unaccompanied since last fall, fled violence in El Salvador, Guatemala and Honduras. Wolverine Human Services is reviewing a contract to maintain a shelter for male unaccompanied minors ages 12 to 17. That could increase to 120 after an initial 60 arrived, the organisation has said.