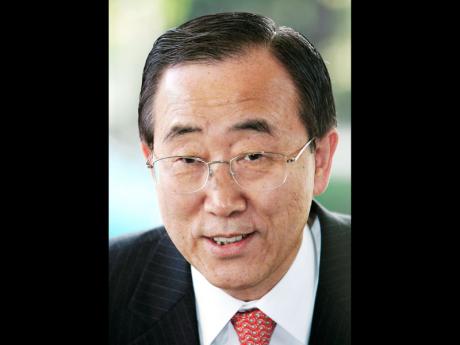 In making what he described as a "necessary pilgrimage" to Haiti, United Nations Secretary-General Ban Ki-moon has called for intensified efforts to ensure access to safe drinking water and adequate sanitation, as he launched a new UN-supported initiative and met with families affected by the cholera epidemic.

"We are making progress, and we will continue to pursue with all our energy our goal of freeing the country from the disease," he added.

"I know that the epidemic has caused much anger and fear. I know that the disease continues to affect an unacceptable number of people," Ban continued. "Whatever I say will not lessen the despair you have felt over the loss of your loved ones."

But the UN chief did not acknowledge the global body's alleged complicity in causing the epidemic, the subject of at least two lawsuits filed in the United States.

The UN said there have been about 703,000 suspected cases of cholera and an estimated 8,500 deaths since the beginning of the epidemic in October 2010.

The disease has been absent from the earthquake-ravaged, country for nearly 100 years until after the devastating January 2010 earthquake.

Forensic studies have identified the cholera bacteria as an Asian strain carried by Nepalese members of the United Nations Peacekeeping Force in Haiti, known by the French-acronym, MINUSTAH.

The UN, however, said it has initiated a system-wide effort to support the Haitian Government to fight the disease.

Ban has sought to raise US$2.2 billion to eradicate cholera.