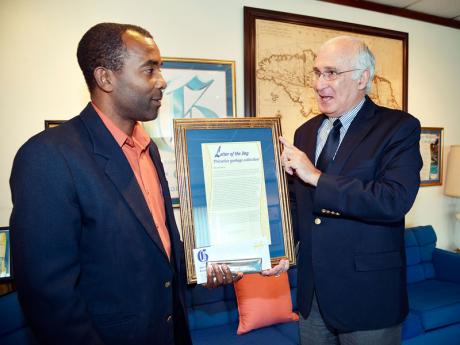 ALLAN DOUGLAS, a retired officer of the Jamaica Defence Force (JDF), last week walked away with The Gleaner's Silver Pen award, following his letter that was published recently.

His letter titled 'Privatise Garbage Collection' which was published March 21, 2014, highlighted the gap in the necessary financial support which he believes has not been provided for the National Solid Waste Management Authority (NSWMA) to carry out the collection and safe disposal of solid waste islandwide.

This, he believes, has been a major contributor to the ongoing fires at the Riverton dump.

According to him, successive administrations have ignored the fact that the NSWMA was set to be a regulatory body of solid waste in Jamaica.

"Efficient operations, especially those dependent on mechanical services, cannot be bogged down with slow, bureaucratic processes or the under-funding that the public service in Jamaica has continued to face."

Douglas told The Gleaner last week that it was imperative that Jamaica moves beyond tribalism and the 'blame game' in order to arrive at a comprehensive solution.

"Whichever administration is in power, the fires would have still occurred because the problem is that the agency has never been funded properly, which brings me to the conclusion that the agency needs to go in private hands," he declared.

"When we have these crises (fires), it needs to be more than JLP (Jamaica Labour Party) and PNP (People's National Party), and I want to implore young Jamaica to employ a reactive attitude, instead of adapting the habit of always pointing fingers," he said.

In the meantime, Douglas expressed gratitude for the recognition, adding that he aims to do his part in ensuring that the morals in the society are upheld.

"I feel over the moon. It's a great moment for me. The desire of mine is to do my part in helping persons to understand that life is much more than politics, and I believe if I have convinced one person, I have down my job," he said.