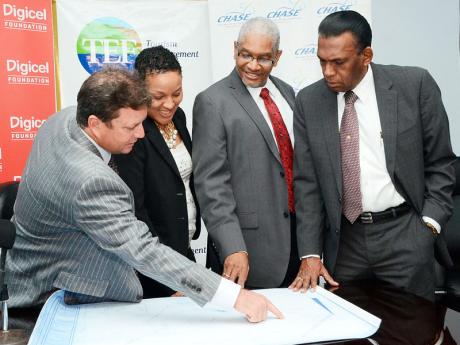 Jason Henzel (left), chairman of the BREDS Treasure Beach Foundation, points out features on a blue print of the future multipurpose building to be constructed at the Treasure Beach Sports Complex in St Elizabeth to partners in the project (from left) Lisa Lewis, chairperson, Digicel Foundation; Nalford Hyde, project manager, Tourism Enhancement Fund (TEF), and Wilford 'Billy' Heaven, chief executive officer, The CHASE Fund. The occasion was the signing of a memorandum of understanding between CHASE, TEF, Digicel and BREDS, at the TEF office in New Kingston yesterday morning. - Contributed

A Memorandum of understanding was signed among the CHASE Fund, Treasure Beach Foundation (BREDS), the Tourism Enhancement Fund (TEF) and Digicel Foundation for the construction of the Donald Buchanan Tourism Sports Centre in Treasure Beach, St Elizabeth, starting today.

The project has seen contributions of $21,261,312 million from TEF; $10 million from Digicel Foundation and BREDS; and $7.5 million from CHASE. It is projected to be completed within five months.

Jason Henzell, chairman of BREDS, operators of Treasure Beach Foundation, gave an overview of the project during the signing of the MOU at the Ministry of Tourism and Entertainment, at Knutsford Boulevard in New Kingston yesterday morning.

"The land (15 acres) came up for sale in 2004 and I went to the then Minister of Water and Land, the late Donald Buchanan. The Government bought the land from the NWC (National Water Commission), then the land was leased to BREDS for 50 years," Henzell disclosed.

"Since then, $50 million was raised for phases one, two and three from partners such as Digicel Foundation, UNICEF, Scotia Foundation, Royal Bank of Canada, Wray & Nephew, Helping Hands Jamaica Foundation and Sports Development Foundation.

"Now, phase four will get underway tomorrow (today) to construct a multipurpose building as part of the Treasure Beach Sports Tourism Park and at the completion of the project the facility will be able to host international warm-up games," Henzell added.

"It's such a great project to re-establish interest in sports at the community level. If we can have more facilities it would be great as it is about the integration of sports. We have to bring everybody together and this project does that. It will play a big part in the development of communities," he reasoned.

"This is one of the best example of a public- and private-sector project. When it is finished other private sector (entities) have shown interest in setting up at the facility. It should be completed within four to five months," Heaven told The Gleaner.