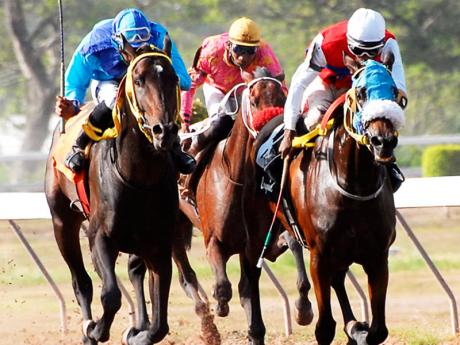 Horse of the Year PRINCESS POPST R,goes for her sixth win, from as many starts, in today's open-allowance feature, over 1200 metres at Caymanas Park.

Given her unbeaten record, it will take a brave punter to oppose her in the eight-horse field.

As a result of that performance, she was expected to dominate the classics earlier this season, but suffered an injury.

While preparing to make her seasonal debut in the Thornbird Guineas Trial Stakes, mid-February, 'POPSTAR' sustained a muscle injury and had to be sidelined, missing not only the 1000 Guineas and Oaks in April, but the Derby and St.Leger as well.

Returning to active competition on Wednesday, June 29, PRINCESS POPSTAR showed she had lost none of her glitter, winning the Gerry Skelton Memorial Cup overnight allowance feature, over 1100 metres, in post to post fashion, covering the distance in the smart time of 1:05.3 with Percy Williams aboard.

Although stepping up to open-allowance company today, 'POPSTAR', with a mere 50.0kg, and Williams again in the saddle, cannot be opposed, despite the presence of her in-form stable-companion, EL PODEROSO (Winston Griffiths up), who failed in his bid to complete the hat-trick behind UPPA TUNE in last Saturday's Reggae Trophy, grade one feature, over the straight.

Having impressed at exercise on July 9, clocking a brisk 59.4, over the round five course, PRINCESS POPSTAR should pack too many guns for topweight EL PODEROSO in what could be her last race before leaving Jamaica to contest the Trinidad Derby in September and continue her racing career over there.

Elsewhere on the nine-race programme, Dennis-Thwaites-trained MARINE DRIVE is confidently expected to resume winning ways when she takes on six opponents in the second race (claiming $350,000-$300,000) over 1300 metres, with 3.0kg claiming apprentice Orayne Sewell aboard.

After winning easily over 1400 metres at this level on June 1, she went up in class and finished a creditable third (always prominent) to DINATA, over a mile, on July 5, and now back among her peers with only 51.0kg, should win from AQUILLO.

Take IT'S MY BIRTHDAY to go one better in the fourth, MR. LUVAL with Dick Cardenas up to catch NUH VEX and STOP A GAP in the sixth and the stretch running SHADE OF BEAUTY with Cardenas aboard in the eighth.