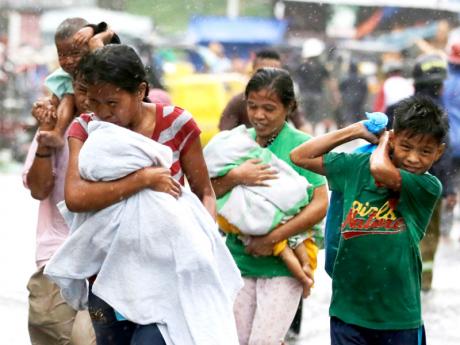 Residents at the slum community of Baseco evacuate to safer grounds at the onslaught of Typhoon Rammasun. 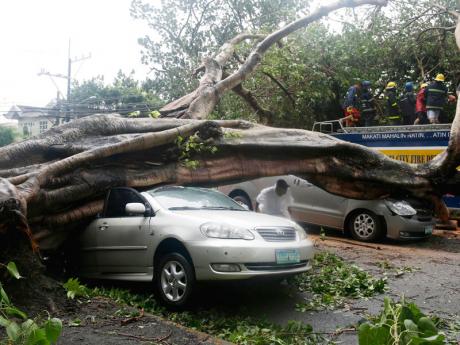 Firemen remove the branches from a fallen tree which fell on two cars at the onslaught of Typhoon Rammasun (locally known as Glenda) which battered Makati city, east of Manila, Philippines, yesterday.
1
2

A typhoon left at least 12 people dead, knocked out power in many areas, damaged a parked plane but spared the Philippine capital yesterday when its fierce wind shifted, officials said.

The typhoon weakened before it blew out of the country, heading towards northern Vietnam or China's Hainan Island, forecaster Jori Loiz said. He said it could regain strength while crossing the South China Sea.

In a shantytown at the edge of Manila Bay, hundreds fled when strong wind tore tin roofs. Most were drenched before they reached an evacuation centre with the help of emergency workers.

Manila Mayor Joseph Estrada said he was relieved there were no reported deaths after the typhoon sideswiped his city, although its wind still downed trees and damaged seaside shanties, prompting more than 1,000 residents to evacuate.

"It was like a drill," he said. "We hauled people away from dangerous seaside areas, whether they liked it or not."

Officials reported at least 12 deaths elsewhere, mostly pinned by falling trees and electrical posts. A fire volunteer died when he was hit by a block of concrete while hauling down a Philippine flag in suburban Pasig city, said Francis Tolentino, chairman of the Metropolitan Manila Development Authority.

At the Manila international airport, the left wing of a Singapore Airlines Boeing 777 was damaged after strong gusts pushed it against a bridge passageway, said manager Angel Honrado. No one was injured.

Three fishermen were reported missing in Catanduanes, near Albay province, where Rammasun made landfall late Tuesday.

There were no immediate estimates of the damage in communities that lost power and telephone connections while being pummelled by the wind and rain.

With last year's massive devastation and deaths from Typhoon Haiyan still in many people's mind, officials said people readily evacuated after being told of the danger.

Sampal said residents were worried after witnessing Haiyan's horrific aftermath in the central Philippines last November. At least 6,300 people died and more than 1,000 were left missing.