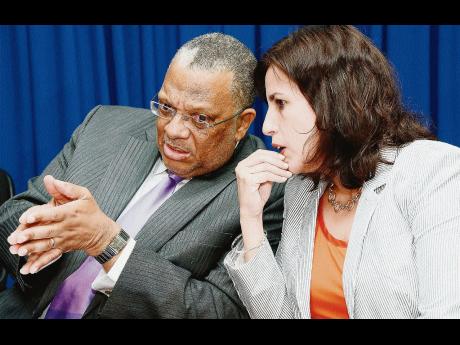 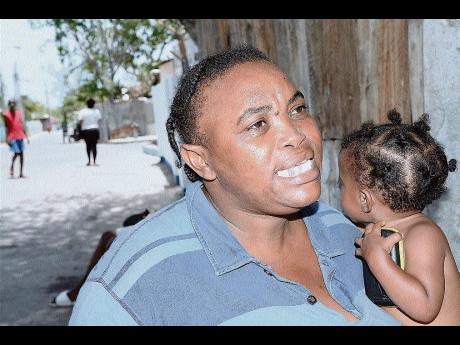 Rose Town resident Loraine Clarke speaks with members of the media just after the Planning Institute of Jamaica (PIOJ) in collaboration with the Ministry of Labour and Social Security, under the Government of Jamaica/World Bank Social Protection Project Strategy, which was launched yesterday at the PIOJ's Kingston office. Photos by Rudolph Brown/Photographer
1
2

WITH nearly a fifth of Jamaicans living below the poverty line, the Government has launched a social protection policy, which Finance Minister Dr Peter Phillips hopes will be the blueprint for not just alleviating poverty but eliminating it from the island.

But even as the administration moves towards putting in place the comprehensive social-protection policy, which would see several areas of social services now provided being brought under one umbrella, many Jamaicans feel the state has not done enough to move them from welfare to work.

"Most of the children living in poverty because the parents dem have no work," David Campbell of Rose Town, St Andrew, told The Gleaner yesterday.

"If dem could get work, dem could buy a pound of sugar or flour ... . If people get employment, many of di youths - if they get work - dem will work," he added.

During the launch of the Government of Jamaica/World Bank social-protection project at the Planning Institute of Jamaica (PIOJ) offices in St Andrew yesterday, Phillips said the state should not be viewed as the sole agent for social protection.

"This is an obligation of the society as a whole, and too often, there is the belief that all these obligations rest only with the state. The state has a leading role to play in providing the framework but we need, as a society, to recognise that there are important private actors, non-state (agencies) in the church, non-governmental organisations, which ought to be directly engaged in an overarching national effort," Phillips said.

The social-protection framework sets out to guide resource mobilisation, legislative policy and programming of service delivery aimed at the neediest Jamaicans.

The primary objective of the strategy is to streamline the various efforts at social welfare, social security, labour market activation, and other aligned issues, so as to secure improved standards of living.

Collette Robinson, manager for the Social Protection and Gender Unit at the Planning Institute of Jamaica (PIOJ), said now that the programme has been launched, committees would be developed across the island to drive the implementation. She said a monitoring and evaluation mechanism is to be developed, even as she stressed that "a lot of the programmes are already in place".

"There is no plan for any new benefit. What we want to do is recognise that we all have some amount of responsibility towards our own social security," Robinson said.

Meanwhile, the finance minister said the success of the current economic reform programme was critical to social transformation.

"The best opportunity to offer effective social protection is by having appropriate economic policies which generate growth and increase incomes for the largest numbers of people in the society. We can't hope to address poverty by simply focusing social programmes on the poor. We have to create an environment whereby people, accepting their own personal obligations can get an opportunity to get jobs and take care of their own circumstances," Phillips said.

Loraine Clarke, also of Rose Town, St Andrew, agreed that education was critical to breaking inter-generational poverty. She said many persons who live in poverty are unable to provide for the basic needs of their children.

"Many people, poorer than myself, are unable to give their children breakfast. Plenty times, I have to give them breakfast, even though they have parents," Clarke said.

She said critical to the success of any transformative social intervention programme would be training facilities for parents to enable them to better discharge their responsibilities to their children.

"Dem need to teach dem to be better man and ooman of tomorrow; dem not getting that help," said Clarke, while admitting that there are some Jamaicans who have been too overly dependent on government to provide for their needs.

A floor on social spending has been built into the four-year extended fund facility that Jamaica has signed with the International Monetary Fund (IMF).

Derrick Kellier, the country's labour and social security minister, said closing the gap between rich and poor Jamaicans would be challenging. He said that with 80 per cent of the world [population] existing without comprehensive social protection, Jamaica has to make it a priority to deal with issues such as planning for retirement, putting in place unemployment benefits and parental responsibility.