Lawrence at DC United for trial 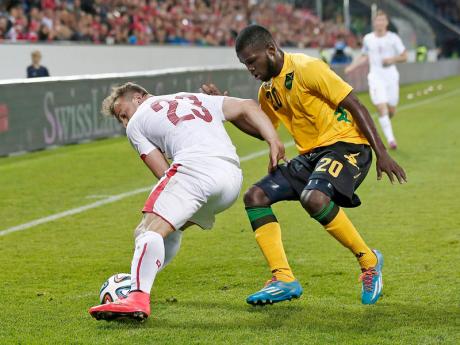 Jamaica's Kemar Lawrence (right) fights for the ball with Switzerland's Xherdan Shaqiri during their international friendly football match at the Swissporarena in Lucerne, Switzerland, ahead of the 2014 World Cup finals on Friday, May 30. - AP

However, the 21-year-old Lawrence, who represents Harbour View in the Red Stripe Premier League (RSPL), is also recuperating from a groin injury and has not started his try-out as yet.

He told The Gleaner in an interview from his base in Washington, DC, yesterday that he is currently undergoing rehab work on the injury, but he should start working out with the team by the end of this week.

"It really feels great to be here, but there is just one bad thing ... I am recovering from a groin injury and so I can't really show my true potential yet," said Lawrence.

"I have to be doing rehab and some light stuff and so, hopefully, by the end of the week I can really go into some hard training," he said.

Lawrence, who has nine caps for the Reggae Boyz, is confident that once he is injury-free he should be able to impress the DC United coaching staff, in his bid to secure a permanent contract.

"Getting a contract here would mean the world to me and so I definitely want to be above 80 per cent fit so that I can do some good training with the team," Lawrence said.

Lawrence said he has been well received by fellow players and members of the coaching staff since arriving there on Monday night. DC United is also the club of Reggae Boy Michael Seaton.

"It's a really good opportunity for me and the players here are really nice and we get along well," said Lawrence, who is currently the Pepsi Ambassador for Jamaica.

Last season, he netted two goals in the RSPL for Harbour View.