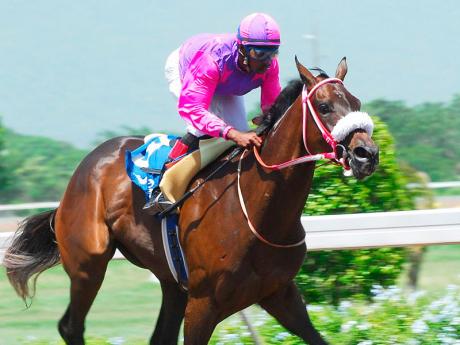 Reigning 'Horse of the Year', PRINCESS POPSTAR, extended her unbeaten streak to six with another effortless display in winning the open allowance feature over 1200 metres by seven lengths at Caymanas Park yesterday.

Installed a 1-9 favourite with former champion jockey Percy Williams riding for 14-time champion trainer Philip Feanny, PRINCESS POPSTAR broke smartly from the outside post position in a field of eight and proceeded to make all impressively.

Despite running into a very strong headwind, 'POPSTAR' covered the distance in the fairly good time of 1:12.2, behind splits of 22.4 and 45.4 for the first half mile.

Williams said she could have gone faster, but given her unblemished record, she had nothing to prove.

"The headwind was strong, but she was coasting early in the straight and I didn't have to ask her to run faster. She's an exceptional three-year-old filly, and with her connections deciding to contest the Trinidad Derby in September and having indicated she will not return to Jamaica, it would be a privilege were I selected to ride her in Trinidad for select races," said the 1994 champion jockey.

This was PRINCESS POP-STAR's second win from as many starts this season, having recovered from a muscle injury to win her previous race for the Gerry Skelton Memorial Cup over 1100 metres in overnight company on June 29.

As a result of the injury she suffered in early February, the talented filly by Adore The Gold out of Docs' Paladin missed the classics.

PRINCESS POPSTAR is co-owned by Pail Hoo and Herbie Chong and bred by the HAM Stables Limited. She thus pushed her career earnings to $7.1 million from her six wins.

Chong said this was her last race before leaving for Trinidad for the derby.

He further disclosed that she will be prepared by T&T's top trainer, John O'Brien.

"O'Brien was the trainer of our other horse BRUCEONTHELOOSE who left Jamaica after his near miss in the 2009 derby to dominate racing in the twin island republic, winning four 'Horse of the Year' awards," he recalled.

PRINCESS POPSTAR was one of five favourites to score on the nine-race programme, which saw Devon 'Papa' Thomas and the improving apprentice Kuri Powell sharing the riding honours with two winners each. The other winning favourites were Unbreakable, Marine Drive, It's My Birthday and Justice Rhoodal.