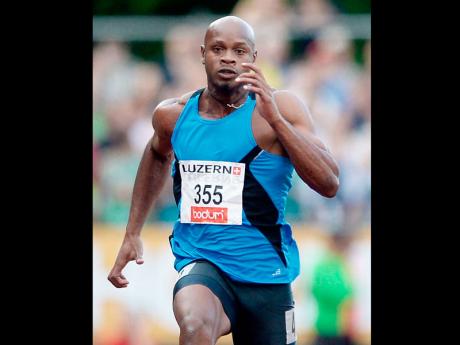 Asafa Powell of Jamaica takes part in the men's 100m race at the International Athletics Meeting in Lucerne, Switzerland, on Tuesday. - AP

Jamaica's Asafa Powell expressed satisfaction at returning to competition and says he needs to work his way back 'bit by bit'.

Powell finished tied for fourth overall in the men's 100 metres in the Spitzen meet, Lucerne, Switzerland, on Tuesday.

Competing just a day after his 18-month ban was reduced to six months by the Court of Arbitration for Sport (CAS), the sprinter clocked 10.30 seconds in the time final.

It was the former world record holder's first race in a year. He last competed in the Lausanne Diamond League meet in July last year.

"It's good to be back," Powell told reporters after his race.

"I haven't trained for three weeks. I need to come back back bit by bit," he added.

The fastest time, 10.23, was returned by Kemar Hyman of the Cayman Islands, with Jamaica's Julian Forte next in 10.24, while Antoine Adams of St Kitts clocked 10.29 for third.

Two other runners crossed the line in 10.30 - Marvin Bracy of the United States and Trinidad and Tobago's Keston Bledman.

Michelle-Lee Ahye from Trinidad and Tobago won her fourth consecutive 100m race in Europe, clocking 11.09 in the time final. American Tianna Bartoletta was second in 11.20, while Jamaica's Schillonie Calvert took third in 11.32.

Sherone Simpson, who also had her 18-month ban reduced to six on Monday, was seventh overall in 11.57.

American Aleec Harris took the men's 110m hurdles in 13.28 seconds, holding off Cuba's Orlando Ortega and Shane Brathwaite of Barbados, who both clocked 13.30. Jamaican Andrew Riley was fourth in 13.31.

In the men's 400m hurdles, Jamaica's Roxroy Cato (49.09) and Annsert Whyte were second and third, respectively. The event was won by South Africa's Cornel Fredericks in 49.03.