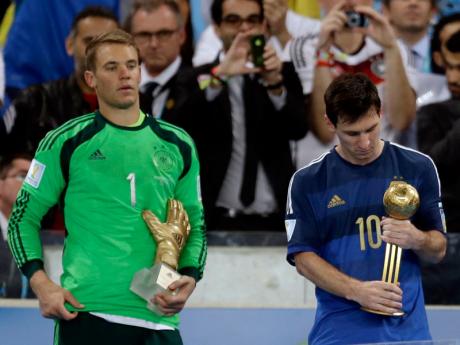 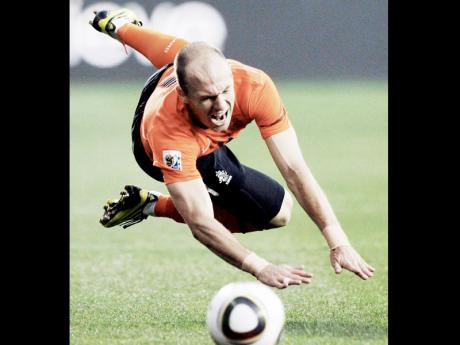 In my mind, there's a good reason that FIFA preferred Lionel Messi to Arjen Robben when it selected the best player of the World Cup.

Though Messi's performances dimmed in the Cup's knockout round, FIFA may have felt it had no other choice.

Arjen Robben, the popular selection for the Golden Ball award for the best player of the World Cup, has shot himself in the foot.

Messi was Argentina's cutting edge early on. Best of all was the last-minute left-footer that killed off Iran and the free-kick that settled a duel against the outstanding Nigerian goalie Stephen Enyeama.

In the group stage, he was slotting goals home in every game and in the round of 16, he laid on the slide-rule pass that gave Angel Di Maria the goal that moved Argentina past Switzerland into the quarter-finals.

A listless semi-final and a goalless final made fans wonder if Messi was indeed the player of the tournament.

With Robben urging Holland forward with dangerous dribbles in every game, it seemed that the Dutchman and not Messi deserved the Golden Ball Award

Sadly, it seems, Robben damaged his own chances by consistently simulating injury. Had the referees done their job, he'd have been booked several times. At times when Messi would have stayed on his feet, Robben went 'tumbling'. It must have been too much for FIFA to bear.

Robben did carry his team, but the repeated acts of deception by simulation smudged his report card.

In any case, neither of them would have been my selection.

Manuel Neuer, in my view, was consistently better than either of them and Colombian hitman James Rodriguez. The German not only kept goal better than his counterparts, but he also took the sweeper-keeper concept to a new level.

If anything got by his defenders and approached the edge of the 18-yard box, he swept it away to safety. As keeper and sweeper, he was a gilt-edged insurance policy for the Germans. They couldn't have won the World Cup without him.

As for Messi, a sizzling semi-final and final would have securely placed him alongside the likes of Pele, Ronaldo of Brazil, Cryuff and Beckenbauer in the game's superelite class of players. Fortunately, he will have another chance when the 2018 World Cup rolls around.

Hubert Lawrence correctly predicted the results of 46 of the 64 World Cup games played, including 15 of 16 in the knockout round.