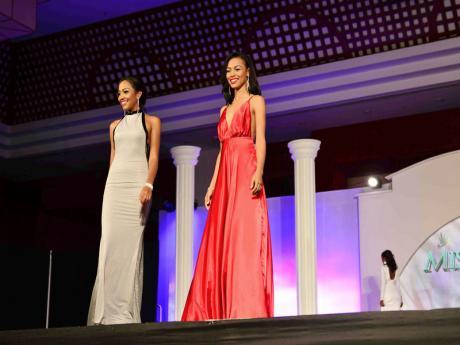 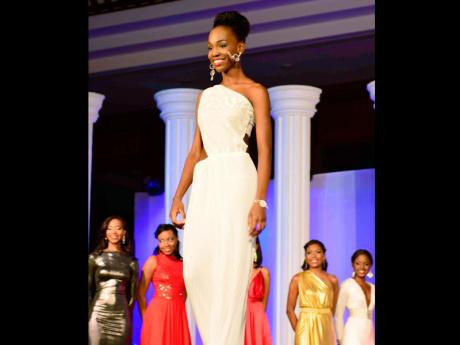 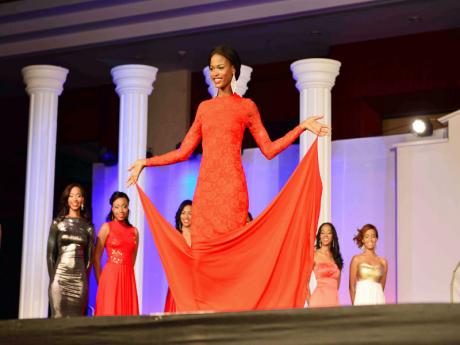 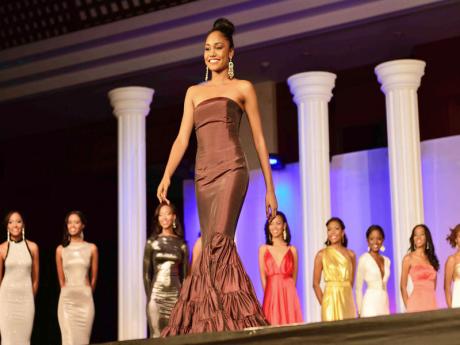 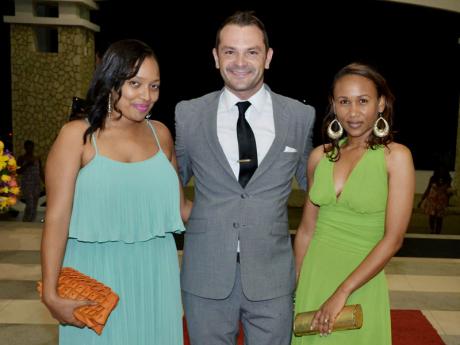 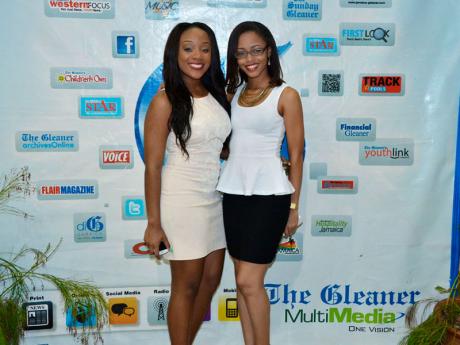 Mystic Mountain's Tamika McDonald (left) and Felicia Clarke were all smiles for our lens. - Photo by Janet Silvera 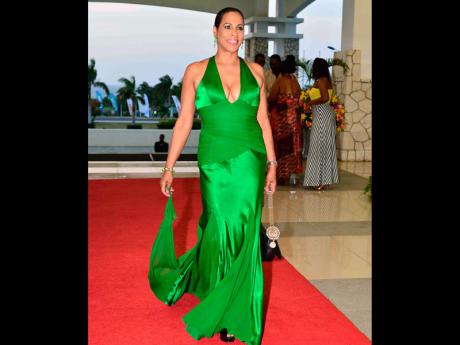 Judge Sophia Max-Brown had the other women green with envy when she strutted The Gleaner's red carpet.
1
2
3
4
5
6
7

While the designs of Arlene 'Drenaluna' Martin, André 'Anarchy' Shirley, Courtney Washington and Lisa 'Neahlis' Aris, reigned supreme on the Miss Jamaica World 2014 runway, some less-known names created ripples on The Gleaner's red carpet. Guests were dressed to 'the nines'.

The Montego Bay Convention Centre was transformed inside and out with a First-World set, that proved that the creative juices were flowing in the innovative minds of Main Event, which stated unapologetically, "There are Main Events, and there are side shows." Living up to their name, Saturday night will go down in the pageant's history as one of the best set designs in years.

The show opened with the contestants, a team of professional football players from the Phoenix All-Stars Football Academy, and dancers from In Motion.

Broadcasted live on Flow 100 to viewers throughout the island, Canada and New York, those who stayed at home watched as Laurie-Ann Chin battled two other giants in the competition, first runner-up, Shelliann Young, and second runner-up, Kimberly Webb, to win the 2014 crown, plus an Audi A3 car, which she will drive for a year, and a scholarship of her choice from four universities.

The schools include the University College of the Caribbean, London University, Florida International University, Kursk State Medical and the Caribbean Maritime Institute. Chin, who won the sectional prize for best figure, will compete in the Miss World pageant in London, England, in December.

The other contestants who won sectional prizes were Webb, for 'Most Aware' and 'Best Smile'; and Toni Oliver won the Caribbean Maritime Institute Essay Competition and a $1 million scholarship to attend the institute. She also copped the 'Best Skin Tone' sectional prize.

Shanna-Kay Ellis received the 'Gleaner's People's Choice' award, while Brittany Pink copped the Digicel 'Text Your Vote' and 'Best Legs' prizes. The 'Most Talented' contestant was Kyeesha Randal, while Regina Harding was the fast-track 'Best Model'. Rounding out the list of sectional prizes were Kadian Collins, 'Most Congenial', Kim-Moya Dawkins, 'Most Sociable', and Shanta Spencer, 'Beauty in Business'.