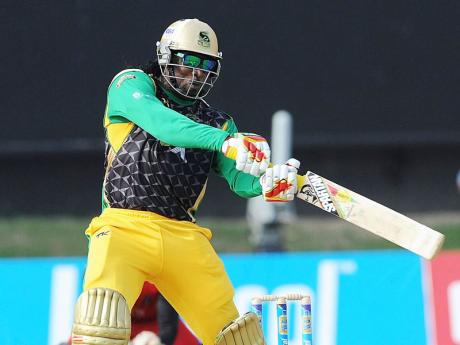 A fired-up Jamaica Tallawahs continued their winning start to the defence of their Caribbean Premier League crown, when they crushed Antigua Hawksbills by eight wickets yesterday.

Asked to bowl first, the Chris Gayle-led Tallawahs bundled out the hosts for a paltry 96 off 18.3 overs, and then cantered to their target off 14.3 overs at the Vivian Richards Cricket Ground.

Gayle was at the forefront of the run chase once again, smashing 37 from 31 balls, including three fours and three towering sixes. He shared an opening stand of 62 off 51 deliveries with Chadwick Walton who was unbeaten on 43 from 34 balls, when victory was achieved.

Seamer Carlos Brathwaite was the best bowler with two for 11.

The triumph was the Tallawahs' second straight, after they easily dismissed St Lucia Zouks by seven wickets in Gros Islet last weekend.

For the Hawksbills, it was their second loss in as many games following their two-wicket defeat at the hands of last year's losing finalists, Guyana Amazon Warriors.

They never seemed up to the challenge yesterday stuttering and stumbling their way through the innings as they lost wickets regularly.

They were undone by Man of the Match left-arm spinner Daniel Vettori, who snapped up three for 13 while speedsters André Russell (2-16) and Jerome Taylor (2-22) finished with two wickets apiece.

Shacaya Thomas perished as early as the second over, when he was trapped lbw for one with the score on two and captain Marlon Samuels counter-attacked briefly with three fours in 13 from six deliveries before also falling lbw to Vettori in the third over, at 15 for two.