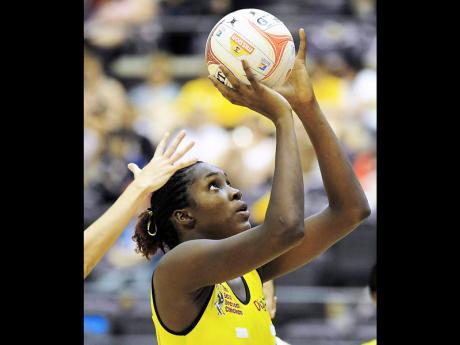 Ace shooter Jhaniele Fowler-Reid says the Sunshine Girls are determined to win a medal at this month's Commonwealth Games, which will be held in Glasgow, Scotland, from July 23 to August 3.

The Sunshine Girls, who are ranked fourth in the world, finished a disappointing fourth at the last Commonwealth Games in Delhi, India, four years ago and Fowler-Reid, who is rated as one of the top shooters in the world, said they have worked very hard in their preparations for this year's tournament and so they are confident of winning a medal.

"I am a 110 per cent confident in them (players), and I am sure that we are going to pull through," said Fowler-Reid prior to the Sunshine Girls departure on Wednesday for the Games.

"We are planning to make the country proud and giving them a reason to come to the airport when we get home," she said.

She added that the unity in the team has been excellent and everyone is committed to giving their all for the country at the Commonwealth Games.

"Things have been going really good because not only is the camaraderie in the team excellent, but the players are putting out the work," she said. "Everybody is happy and ready to face challenges that are ahead of us," Fowler-Reid.

"We all show respect for each other; no matter how young or old you might be, everybody gets respect, and we are just loving each other," she added.

The 24-year-old Fowler-Reid, who will be playing in her second Commonwealth Games, stated that she is looking forward to leading the Sunshine Girls' attack the tournament.

"I have gained much more experience and I am going to put that all on the court in these Games," she said.

The Sunshine Girls are drawn in Pool A alongside New Zealand, Malawi, Scotland, Northern Ireland and St Lucia.