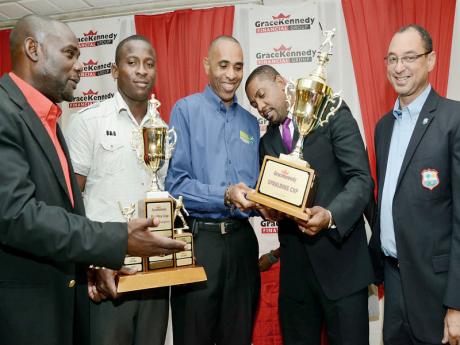 Don Wehby, (right) Group CEO, GraceKennedy; Dave Cameron, (second right) president of the West Indies Cricket Board and Dr Walton Small, (left) president of the Inter-secondary Schools Sports Association (ISSA) at the handover of the Grace Headley Cup and the Spalding Cup to Keith Wellington, (centre) principal of STETHS and Ramaal Lewis, the school's cricket captain. The presentations were made at the GraceKennedy/ISSA cricket awards ceremony held at the Mona Visitor's Lodge, UWI on Tuesday. - Contributed

Ramaal Lewis, captain of the West Indies Under-19s, and Eltham High all-rounder Ramone Francis, were the stars of the show on Tuesday during the annual ISSA/GraceKennedy cricket awards ceremony held at the Mona Visitor's Lodge, University of the West Indies.

He also collected one of the top individual accolades, the Carlton Alexander Award, which is given to the player who demonstrates their highest level of sportsmanship, leadership and discipline throughout the season.

Lewis' teammate, Kevon Williams, was also among the top awardees after copping the Douglas Orane Shield for outstanding performance and academic excellence.

The Oraine Shield has a scholarship value that is tenable at any local university.

Francis, meanwhile, was among members of the Eltham team who collected awards for winning the Under-19 Grace Shield and knockout titles.

He was also the recipient of four personal awards for pocketing the Grace Shield top all-rounder award, and for scoring three centuries.

The most disciplined team award was won by STETHS, while the top coach prize, which carried with it the Raphael Diaz Trophy. and a monetary value of $50,000 went to Clive Ledgister, the coach of STETHS.