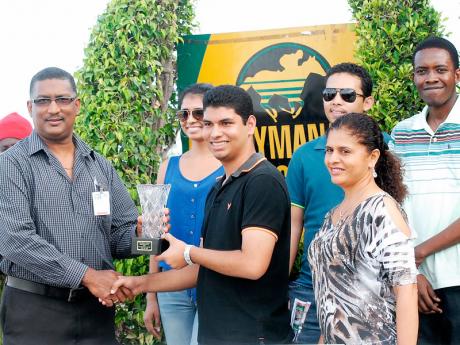 The Pick-9 had no takers at Caymanas Park on Wednesday and the carryover going into tomorrow's meet stands at $1.5 million.

Meanwhile, both Super-6s were caught, the late Super-6 going to nine punters, each receiving $745,0000. Mild upsets by CLASSIC BEAU (8-1) and EL PATRON (9-2) contributed largely to the big payout.

We look at the first Super-6 which commences with a 4-y-o and up restricted allowance race over 1200 metres (non winners of two) to be contested by seven starters. The field includes the hot ante-post favourite ENCHANCE PROSPERITY, who was all the rage for her recent race over the straight five course, but was beaten into second place by GREAT BROWN.

Now that much fitter, the four-year-old filly from the stables of Donovan 'Burru' Thompson, a former assistant trainer to Anthony Nunes, should be good enough to lead home DEVIL'S CHILD.

Next on the programme is a 2-y-o maiden special over 800 metres straight in which seven have been declared, three from the stables of owner/trainer Lorenzo Robinson.

FLYING ACTION, who chased home stable-companion GOLD STREAK on his debut over the distance last Saturday, looks best of the Robinson-trained horses, but he is expected to play second fiddle to the well forward debutant TURN ME LOOSE, a chestnut colt by Western Classic out of Devil's Woman from the stables of 14-time champion trainer Philip Feanny.

TURN ME LOOSE, to be ridden by former champion Percy Williams, has been extensively prepared in recent weeks, catching the eye at exercise on Wednesday morning when galloping three furlongs in 35.3. beating stable-companion FANTASY (a good winner some weeks ago) in that workout.

ROLEX, who has been a model of consistency, gets the nod over the speedy pair of TRAIL BLAZER and SHE'S SO SPECIAL in the third race over the round five course for $450,000-$400,000 claimers.

ROLEX (Shamaree Muir up) is actually down in class for this race and based on his close second to out of class SUNLIGHT EXPRESS (a repeat winner since) over 1100 metes on June 18, looks the one to be beat now contesting a $450,000 claiming tag in a field of seven.

MISS DOROTHY, who has been knocking at the door in recent races, gets the nod over the lightly raced PROVIDER and BARACODA in the fourth race over 1400 metres for maiden four-year-olds and up.

MISS DOROTHY, with Richie MItchell aboard, has finished second in three of her last five races, failing by a length to catch ROMIN over 1200 metres on June 14.

Although managing fourth to JUSTICE ROODALL over the straight on Wednesday, MISS DOROTHY gets the ideal trip on this occasion and is preferred to PROVIDER, a lightly raced colt from the stables of Donovan Thompson who has looked improved at exercise, galloping seven furlongs in 1:32.2 recently and has now been administered Lasix for this race.

The last two races in the first Super-6 should be won by CRUCIAL APPEAL (Cardenas up) and the steadily improving DIGME (Dane Nelson) in the sixth. Their respective dangers are OFFICIAL REPORT and MONEY HONEY.