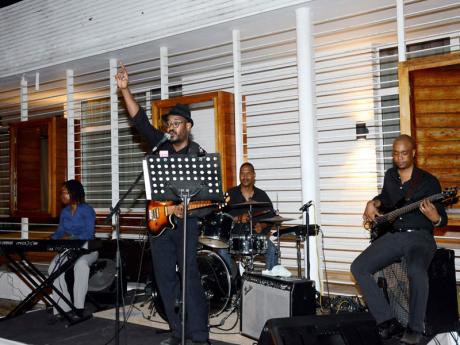 Jamaica and France's lasting relationship was on show at Monday's elegantly casual reception held in celebration of France's National Day.

The relationship was even more pronounced when a Jamaican was entrusted with the important task of singing the national anthem of France.

"It was indeed an honour to have been asked and, I am very happy. I enjoyed it and from all appearances, and from the reception I have received, it did not go over too badly," expressed an elated Franklin Halliburton, sometime after his robust singing of an anthem that he described as "a militant march".

"I tread very gingerly with somebody's national anthem, when you are asked to take on a mammoth task like that, especially in a foreign language on their day", he added.

It was Halliburton's first attempt at singing the anthem. Only one request was made of him from the embassy, and that was to give a rousing rendition in acapella. Not a French speaker, he found YouTube very helpful, with the pronunciation of words as well as the tune.

He was not undaunted by the challenge of identifying which was the correct versions of several. So he called on the expertise of his French friends in making the right choice, and ultimately receiving applause from the guests of mixed nationals.

Held at the Hillcrest location of the French Embassy, the short formal segment of the evening saw brief remarks from Arnaldo Brown in the Ministry of Foreign Affairs (Jamaica), and Jean-Luc Wertheimer, chargé d' affaires in the Kingston Embassy of France. Wertheimer was officiating in place of the ambassador designate, who had only arrived last Sunday.

Brown shared that France had some impact on Jamaica over the past year, under the directive of the former ambassador, Ginette de Matha. He cited as his example the return of the exhibition, 'A Touch of France', and especially the involvement of Caribbean neighbours Guadeloupe and Martinique. This involvement lends itself to further collaboration between the two countries.

The chargé d' affaires also acknowledged that Jamaica is France's neighbour due to the location of the departments of Martinique and Guadeloupe in the Caribbean. He highlighted, briefly, Jamaica and France's bilateral relationship in education, business, social and cultural. In culture, Jamaica and France's bilateral relationship in music and dance is "alive and well", reggae is popular in France, he affirmed.

Another area of the cultural relationship between the two allies is fashion. This was, however, voiced by Deiwght Peters, CEO of Saint International, who, along with four of his models in tow, were among the specially invited guests.

"We have a good relationship with the French Embassy and we have been sending models to Paris for a very long time. We are also a big sponsor of a Touch of France from the very inception. We are the leading exporters of Jamaica's model to France", the fashion guru told The Gleaner.

The evening of celebration was completed with a beautifully decorated venue, showcasing round oriental lampshades of blue, white and red, the colours of France's national flag. The lit lamps were creatively placed along walkways and under tents boasting a wide assortment of French cuisine.

Different genres of music such as latin and reggae, and Charles Trenet's song, Douce France, performed by the Black Zebra band, mingled with the chatter and the aroma of the French cuisine. master of ceremony was Jean-Paul Menou.

The establishment and celebration of France's National Day, known as Bastille Day in English, was borne out of a revolution in the 1780s. It marks the passage from one political regime to the formation of the Republic of France.