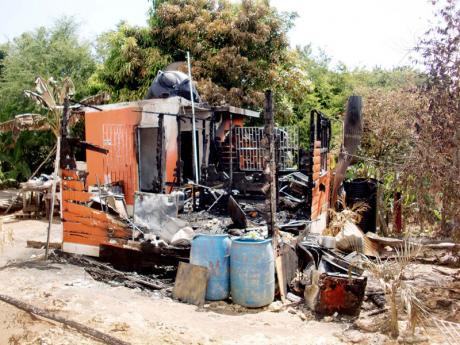 The remains of the ill-fated house in West End, Negril, where three children died in a fire yesterday. - Contributed

CONSTANT BREAK-INS and the fear of being robbed again may have forced the mother of the three children who were burnt to death in a fire at West End in Negril on Friday morning to lock her home tightly.

It was the same locks that held the children inside causing their heart-wrenching death, and the hospitalisation of Cynthia Arthurs, a vendor, who has been described by her neighbours as a caregiver who made sacrifices for her children.

The bodies of sisters, 14-year-old Brittany Boning and 11-year-old Beyonce Leslie, and their eight-year-old cousin, Xavier McKenzie, were found in a bathtub in a section of the two-apartment board and concrete dwelling.

"Her house has been broken into at least once per week in the last month," said one of Arthurs' neighbours.

The single-mother locked her children in her home 'safely', and went to the gym, the police have confirmed. Reports are that she left home at 5 a.m. At 6:30 a.m., she received a call that her house was on fire.

Speculation is rife in the neighbourhood that the fire was the work of arsonists, because of the number of break-ins and attempted robberies that the family has been subjected to.

According to the neighbours, the children did not go without a fight.

"We found evidence of great survival efforts on their part. It is believed the eldest child who was 14 years old, filled buckets with water, filled the bathtub with water, soaked the bed, sheets and blankets, plus the fire department found half buckets of water in the house," a neighbour told The Gleaner.

According to the neighbour, who asked not to be named, the children barricaded themselves in the bathroom, with their faces turned down.

"They were found in the bathtub, face down, with the older child on top, seemingly trying to protect the younger ones," the neighbour added.

Children's Registrar Greig Smith is lamenting
that too many persons continue to take it for granted that children can
be left to take care of each other while their parents are away from
home.

He said it is a careless practice that needs to
stop and those who are found in breach will be charged by the police for
neglect.

Smith, who was on the scene when the bodies
were being removed, said it was extremely sad to see the loss of such
young lives due to the reckless behaviour of the person responsible for
caring and protecting them.

And he is reminding
parents that under the law, a child is anyone under eighteen years
old.

"It is an offence under the Child Care and
Protection Act for us to leave a child to care for children. As we saw
in Negril, a 10-year-old and eight-year-old were left in the company of a
14-year-old; padlocks for the burglar bars were closed, and the the
children were all left inside. We want to encourage parents not to leave
children alone"