Park rangers - defenders of the earth 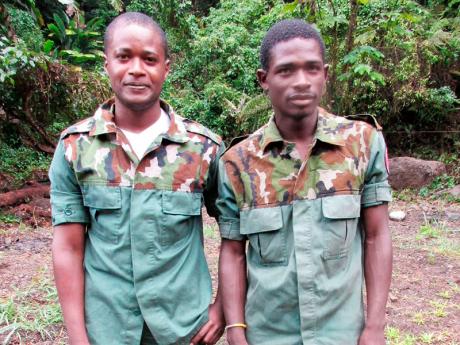 Jermy Schroeter (left) and Marlon Hamilton are two of the rangers who help to protect the Blue and John Crow Mountains National Park in eastern Jamaica. 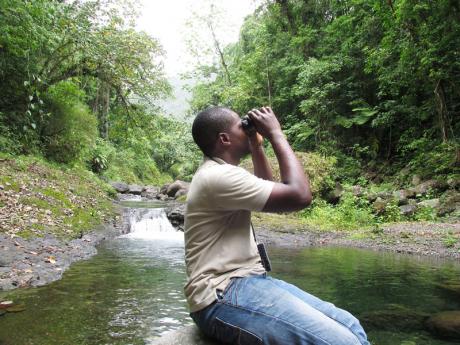 Bird monitoring, as is being done by Jermy Schroeter in this picture, is one of the duties of rangers in the Blue and John Crow Mountains National Park. 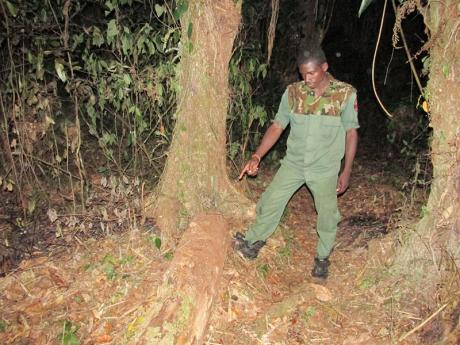 Ranger Marlon Hamilton says one of the challenges of his job is to get people to understand the importance of protecting the environment. 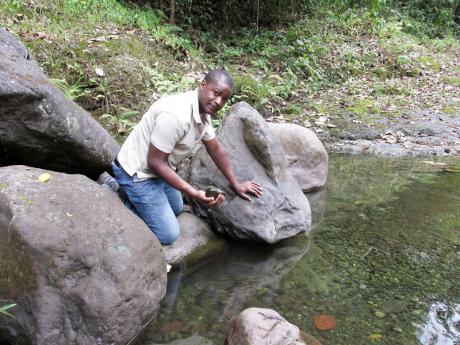 Ranger Jermy Schroeter said the potable quality of the water sources in the Blue and John Crow Mountains National Park can be checked by testing organisms that live therein.
1
2
3
4

STRADDLING THE mountainous interior of St Mary, Portland, St Thomas, and St Andrew, the Blue and John Crow Mountains National Park (BJMNP) was established in 1993 and is still Jamaica's only national park.

It is a region of great biodiversity and natural resources, and, as such, it is protected by law. The BJMNP is managed by the Jamaica Conservation and Development Trust (JCDT) in collaboration with the National Environment and Planning Agency and the Forestry Department.

To them, "the BJMNP is important because it ensures a constant supply of water for domestic, agricultural, and industrial purposes; the forests prevent floods and landslides; it is home to a high diversity of unique plants and animals like the giant swallowtail butterfly, Jamaican Coney, Jamaican owl and the Jamaica boa; its forests are the lungs of eastern Jamaica; the Maroons lived there in the hills of Nanny Town; it provides recreational opportunities like hiking, camping, and birdwatching".

Despite its importance, the BJMNP is under constant threat of deforestation as a result of the cutting down of trees for lumber and agricultural activities; the invasion of new plant species; uncontrollable forest fires; hunting and killing of wildlife; dangerous fishing practices; and the establishment of illegal settlements. So "in an effort to conserve, save, and maintain the park" the JCDT conducts conservation, enforcement, education, recreation, monitoring, and governance and administration programmes.

Some of the participants in these programmes are the national park rangers, and Rural Xpress met two of them way up in the mountains near old Nanny Town. They are Marlon Hamilton and Jermy Schroeter, who spoke with us about the nature of their working and the inherent challenges they face in executing their duties.

The rangers are the ones who go to the park to observe what is going on there and to prevent "hazardous" activities from taking place. For instance, Schroeter said, macro-invertebrates, taken from water sources, are checked by rangers to see what the quality of water is. They are tested to determine whether the sources are polluted, or contain chlorine, detergent, or poison, which are used to kill fish stock.

Schroeter, who said he has always been interested in the environment, started out as a guide in his Redlight mountainous community in St Andrew, eventually becoming a national park ranger whose duty, among others, it is to report anomalies and breaches after assessing locations where suspicious activities are taking place.

He said being a park ranger "is a wonderful experience in terms of going around and being part of nature". He also enjoys meeting and socialising with the users of the recreational areas of Hollywell and Portland Gap. For him, the biggest challenge he faces on the job is to successfully convince people to take steps to protect the environment as some people are simply not interested and do not conform.

Marlon Hamilton, a ranger for four years now, has a similar challenge. And sometimes, he said, because of his youthful appearance, violators question his authority. To lessen the tension between the rangers and the people who live in the communities within the park, there are outreach programmes that target residents.

One way of not exposing themselves to violence is by working in groups. There are regular patrols in the mountains to manage visitor traffic, to accompany tourists, to enforce the law, and they do have the power of arrest. What they do is much work to protect endemic and endangered species, to monitor bird populations, and to prevent wild fires and the clearing of trees and other vegetation within the park.

Like Schroeter, Hamilton enjoys being a national park ranger. "I like what I do," he told Rural Xpress. He has always admired the work of park rangers, and now he is one helping "to maintain and enhance the remaining area of closed broadleaf forest and component species of plants and animals that exist in the Blue and John Crow Mountains National Park".