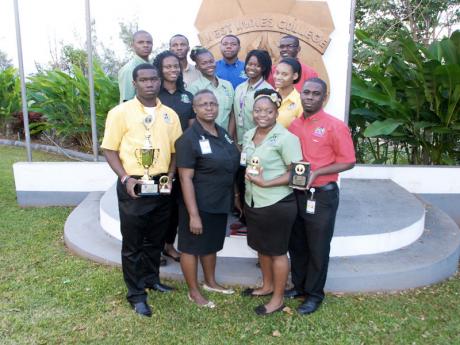 Members of the Northern Caribbean University debating team, along with their coach (second left) after participating in the Sagicor/UTech Middlesex Debating competition held earlier this year. - Contributed

THE NORTHERN Caribbean University (NCU), in association with the Department of Communication Studies, is set to host its inaugural Relay for Debate 5K Run/Walk to raise money for the institution's debating team.

The event, scheduled for Sunday, July 27, at the Brooks Park Social and Recreational Complex in Mandeville, is geared at raising approximately $2 million to assist members of the NCU's debating team on their journey to Kuala Lumpur, Malaysia, later this year.

Each year, the World Universities Debating Competition (WUDC) is hosted by a different university. NCU entered and did well in the competition held in Chennai, India, last year, and hopes to take Malaysia by storm this year. It is for this reason that they have taken on the task of hosting this event, 'Relay for Debate'.

"On the day of the event, persons will go through a warm-up routine, courtesy of a trained instructor, prior to the race. The 5K route will go from Brooks Park on to Ward Avenue, to McKinley Road, to Caledonia Road and back ... . Upon arrival at the venue, after the race, persons will receive complimentary massages, and of course, conditions will apply. There will also be booths available for persons to make their breakfast purchases. Shortly after, there will be a debate match between NCU and a corporate entity. Then we will move into our awards ceremony," former debating team member and event coordinator Sharmica Holness told Rural Xpress.

Holness said the event is not for the sole gain of the university, but also for the empowerment and development of all who participate.

"Debating fosters intellectual growth by providing an avenue for persons to think critically and analyse issues. It affords individuals the opportunity to become fluent public speakers, which is necessary in Jamaica ... . It engenders leadership and critical-thinking skills, which is linked with effective communication, which results in a better world."

"The team has done well in the past by fortifying the county title to be the reigning debate champions of Middlesex and by placing second at the Sagicor/UTech National Debating Championships in 2013. They are ready to represent themselves on the world stage, and the public can help to keep team NCU's dream alive by supporting Relay for Debate."

She mentioned further: "The registration fee for the event is only $1,000 per individual. It will be a day of clean, wholesome fun for the entire family and an unforgettable experience."